The Welsh Harlequin Duck breed is a recent breed of domestic duck native to Wales. Today, the Welsh Harlequin is a breed of light duck known for its lively plumage and egg-laying ability. Over the years, the breed’s color and makeup have changed, indicating that new blood from another breed has likely been introduced.

In 1949, at Criccieth, Group Captain Leslie Bonnet discovered a color mutation among his herd of Khaki Campbells and began selectively breeding for this trait. In 1968, the hatching eggs were exported to the United States, followed by the importation of live birds in 1981. 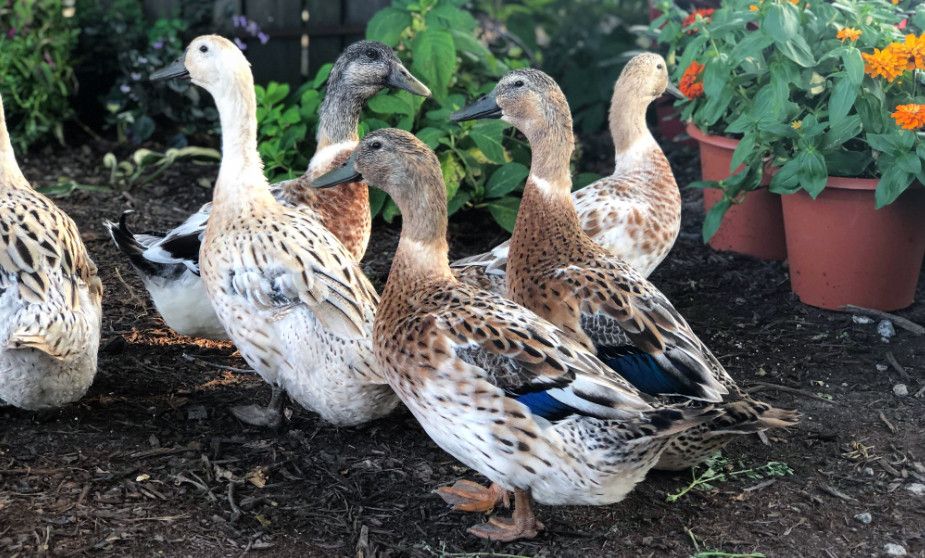 History and Origin of the Welsh Harlequin Duck

It was in 1949 that Captain Leslie Bonnet (1902-1985) discovered on his farm in Criccieth (on the shores of Cardigan Bay) a color change in his flock of khaki-Campbell ducks and began a strict selection to maintain and fix this feature. The breed was saved by a breeder, Eddie Grayson, of Lancashire, in the early 1960s2. The eggs were exported to the United States around 1968, followed by the importation of several specimens in 1981. The Welsh Harlequin contributed an Aylesbury Cross to Whalesbury Duck Creation, again by Captain Bonnet.

Today the breed is fixed as a light duck with bright clear plumage, whose duck is known for its laying qualities. The colors and makeup of the breed have evolved, suggesting a new blood supply. The Welsh harlequin weighs between 2 and 2.5 kilograms. Females have black beaks, and brown legs and their plumage is similar to that of the mallard, but evolving towards a honey-cream color with a contribution of white feathers, and without the dark line that extends to both sides of the eye.

Bronze-headed males are similar to mallards; they show a white neck ring, with slightly spotted plumage and a greenish-yellow bill, and orange legs. The shoulders and chest are mahogany, and the belly is white. Young males have a darker bill than females. There is also a “golden” variety, highly appreciated in Great Britain, which replaces the black pigments in the feathers with a golden brown color.

This breed is calm and docile. Duck makes an excellent coat (generally 150 to 190 eggs per year averaging 65 grams5). The Welsh Harlequin is one of the breeds recognized by the British Poultry Standard. The Welsh Harlequin was admitted to the American Poultry Association’s standard of perfection in 2001. But due to its small size in North America, it is considered endangered by the American Livestock Breeds Conservancy.

As long as these ducks have suitable housing, a protected run, constant access to clean water, and a healthy diet, they tend to thrive wherever they are kept. The docile and calm nature of Welsh Harlequin ducks is one of the many reasons they are so popular as backyard pets first and egg layers second.

They can be noisy, but some breeds, such as the Cayuga, are quieter than others. Welsh Harlequin females make noise when laying and often when expecting their morning meal.

Is a Welsh Harlequin a Mallard?

The first known Mallard domestication took place in Asia about 4,000 years ago. It’s unknown when Muscovies were first domesticated, but it likely happened thousands of years ago in their native range of Mexico, Central, and/or South America. So, Welsh Harlequins’ wild ancestors were Mallard ducks.

What are harlequin ducks good for?

East Coast harlequin numbers have declined from perhaps 10,000 birds in the 1800s to fewer than 1,000 currently. “This population is doing terribly and may be headed for oblivion,” says Jim Reichel, a zoologist with the Montana Natural Heritage Program.

The upper back has a tortoiseshell of cream, white, brown, and chestnut while the forewings are cream-white and reddish-brown, with a shiny green and bronze cross-band. The tail is blackish/bronze-edged in white, the legs and feet are orange, and the toenails are brownish-black. They do not truly fly.

Can you eat Harlequin Duck?

Harlequin ducks are a game species and are hunted and consumed in many regions of the world.