The Siciliana chicken (not to be confused with the Sicilian chicken recipe), is an ancient breed of chicken native to the island of Sicily in Italy, from which it takes its name. It is the typical light bird of Mediterranean origin, and it is present in different color varieties, but it differs from the other breeds due to the peculiar shape of the crest, known as »coppa«, a characteristic that has made it popular and unique. in the world.

It is a rustic style chicken, slim and light, with elegant shapes but less showy than other Mediterranean breeds. The Siciliana is a dual-purpose bird, raised for the production of eggs and meat. It has a cup-shaped crest, and the two parts meet at the front and preferably also at the back, its crest has 5 well-defined points on each side. The earlobes are red. The average weight is 2.0–2.4 kg (4.4–5.3 lb) for roosters and 1.6–1.8 kg (3.5–4.0 lb) for hens. 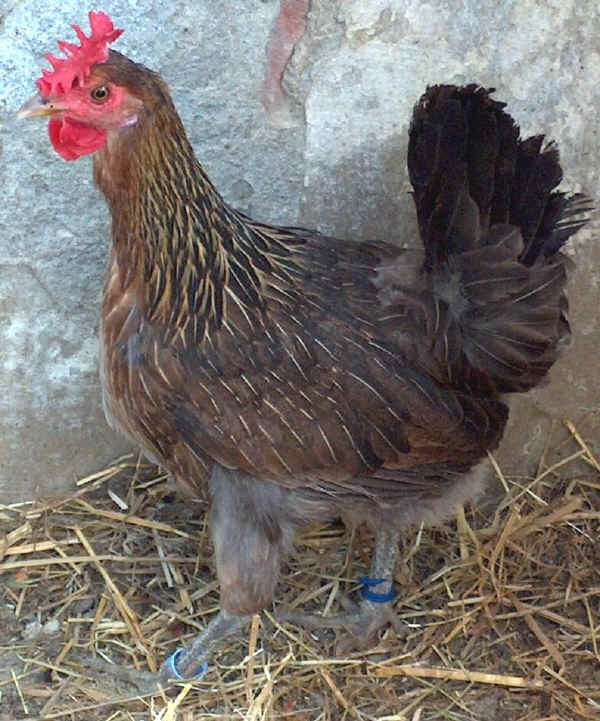 Four color varieties of the Siciliana breed are recognized: golden duckling, black, white, and, since June 2008, blue. The legs are willow green, and the skin is smooth and yellow.

The Siciliana is a very rustic and lively chicken, with a great aptitude for the production of eggs. A hen with few pretensions, great performance: in short, this is the Siciliana.

Very resistant to hot and dry climates, it has a lively and optimistic temperament, but it is generally not a good flier, so they adapt very well to confinement such as the open field.

Its appearance is fierce and combative, courageous and territorial, particularly resistant to the most common diseases, wandering in nature: if left free to graze, it can obtain a good part of the daily diet, even if it can continue to live and produce confined environments. little ones.

The color of the eggs of the Siciliana Hen varies from white to light brown and weighs at least 45 g each. They are of an unusually elongated and pointed shape.

It is a fast-growing breed. Male chicks can start clucking at four weeks and show sexual behavior at 40 days. Chickens begin to lay eggs at four to five months.

The origins of the race are discussed until the present time; however, experts claim that the breed has existed for many centuries, as evidenced by 16th-century pictorial works that portray it.

According to some scholars, the breed would have originated from the mating between local chickens and chickens from North Africa; in fact, the North African race called Tripolina, in addition to boasting a tuft of feathers, also has a cup like the Siciliana.

Between 1850 and 1860, Captain Daves bought a large number of chickens to supply his crew with eggs and meat during his return trip to Boston. The hens proved to be excellent egg producers, so the specimens that arrived alive in the US became the subject of intense selection by some American breeders who became fond of the breed, including Attorney Cough. and Reverend Brown. Later the breed was renamed Flower Bird, thanks to the shape of the crest, and a little later, Sir Loring imported chickens from Sicily to England, where they were called Sicíaco Buttercup.

US breeders created a different Sicilian from the original, heavier and with white oars, called Buttercup Siciliano, a strain that was bred abroad, while the original Sicilian was progressively disappearing. Fortunately, some Italian breeders are committed to conserving this breed and saving it from extinction.

The breed is bred for recovery purposes in order to preserve and recover it, it has never acquired significant economic but cultural importance.