The Saipan jungle fowl is a breed of chicken that was brought to the United States from Saipan Island in the Northern Mariana Islands, and that’s where its name comes from. At present this bird is extinct in its hometown, and it has not been confirmed if there are pure specimens in any part of the world.

Saipan rainforest birds mature very slowly; It takes up to 3 years for them to reach full maturity. They are very tall birds, and the roosters can reach the size of 60cm to 1m in height. They also have very tight feathers and shorter tails than most other chicken breeds. The Saipan has a very muscular and upright posture that resembles eastern game birds like; the Malay, the Shamo, and the Asil. It has a flat crest and small red lobes. The birds of the Saipan rainforest are generally used for ornamental purposes and cockfighting. 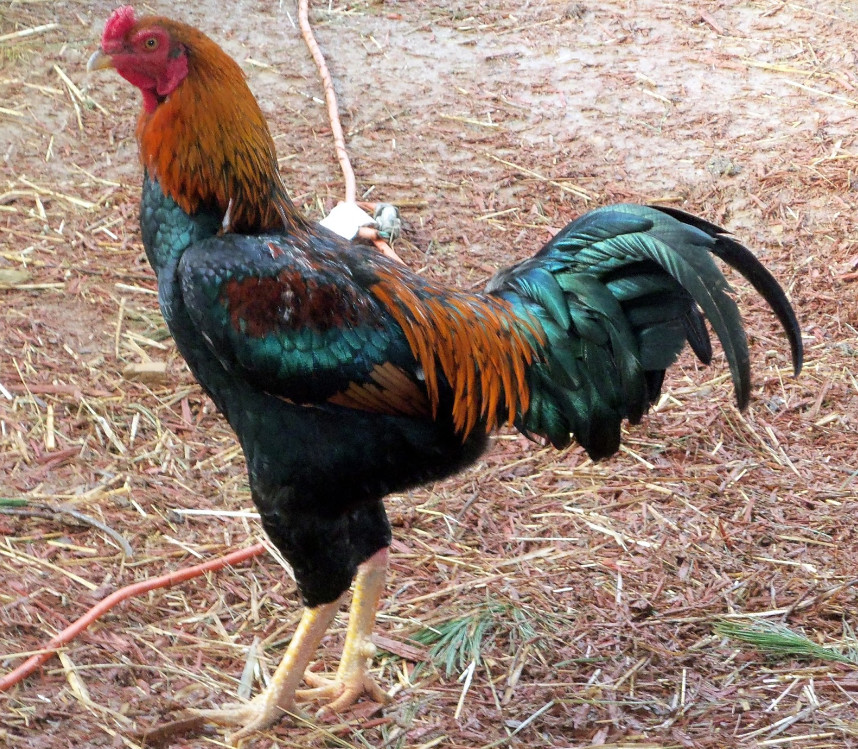 Due to its unique genetics, the Saipan does not thrive on the grain- or soy-based diets of typical domestic fowl. To reproduce successfully, its diet must be supplemented with fat; Fruits, and vegetables for adequate fiber, crab food, and/or fish.

There are many colored varieties of this imposing bird, the most common being red, black-breasted males, and wheat-colored females.

These birds have a high degree of aggressiveness toward other chickens. If they are raised together, it is known that even roosters can tolerate each other. That said, if you separate them, including the chickens, and try to put them back together, you are in serious trouble, as they will soon fight. Chickens are willing to fight to the death when new birds are introduced. Roosters also have a reputation for being fighters, but chickens are quite tame towards people.

Saipan chickens are poor producers of medium-sized cream-colored eggs, yet they are excellent mothers, with a strong breeding tendency. Hens that were raised by the same mother often hatch and raise the chicks together.

There are many theories about the origin of this breed, some historians indicate that it was probably introduced from the island of Saipan by Austronesian sailors. The first importation of these birds into the United States of America is thought to have occurred when the US military returned to their country at the end of World War II, including BW Saylor, who wrote “The Saipan Jungle Bird” in 1977. An alternative theory is that they were brought over by the Japanese, as this is known to have occurred in other places such as Taiwan during the Japanese colonial occupation.

The combination of the giant jungle birds of the Comoros Islands and the domestic descendants of the red forest birds produced not only the Saipan but also the Shamo, the Malay, the Koeyoshi, and the Asil.

Because they are not recognized by the American Poultry Association, Saipan rainforest birds are not typically kept as ornamental birds. True Saipans are almost non-existent. American breeders put their Saipan birds up for sale, but they sell out quickly because the demand is so high. Purebred birds can be difficult to obtain.

What is the difference between a chicken and a jungle fowl?

During the laying period, red junglefowl females lay an egg every day. Eggs take 21 days to develop. Chicks fledge in about 4 to 5 weeks, and at 12 weeks old they are chased out of the group by their mother — at which point they start a new group or join an existing one.

Some say it resembles chicken with turkey overtones. To me, it’s more like pheasant, but juicier, and since the guinea is dark meat, the flesh really delivers flavor.

Why is fowl meat so tough?

Broiler chickens are raised to grow large quickly, and therefore the fibrous tissue in the meat has become tough or chewier thanks to this hasty process, according to the Wall Street Journal. In other words: Bigger chickens equal tougher meat.