The Peruvian gamefowl is one of the most popular bloodlines of fighting cock roosters in the Philippines and is also among the most expensive breeds. In this extremely long article, we have the opportunity to translate and proofread the complete history of the great Peruvian gamefowl. This is quite an interesting yet long story so enjoy reading it. The link to the original Spanish version is provided at teh end of this article.

Peruvian rooster went through many stages of improvement until the standard that we have today was achieved, it would be countless to mention the architects of this story of panache and courage.

How the Peruvian Gamefowl was Developed

The Peruvian fighting cock was developed by a Peruvian named Don Humberto Gregorio Pedraglio Oddone who was born in Lima on November 17, 1899. They are Italian immigrants. The Peruvian chicken was developed for many years from the late 1930s until its perfection in the early 1970s.

Since cockfighting is not legal anymore in the USA and other parts of North America, the Peruvian gamefowls were not popular in the US as there are other popular bloodlines like Sweater, Roughhead, Lemon, and others, but are extremely popular in Asia such as the Philippines.

Peruvian gamefowl is a fairly old breed of gamefowl, dating back to the 1900s possibly but not perfected until the early ’70s. They were developed by crossing various Oriental gamefowl with Old English Games and Spanish gamefowl. The Oriental breeds mentioned mostly were Shamos, Malay, and Asil as well. 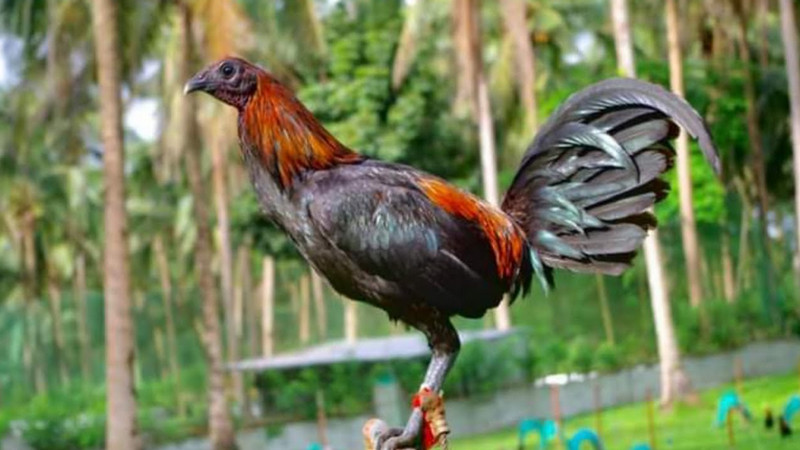 Most Peruvians come in the brown-red variety, but all gamefowl appears in others as well. They may come single or pea combed as most gamefowl, but most of the time they appear in the straight-combed variety. These birds may range from 4-9 kilos with the most common being 8-10 though size doesn’t affect them at all as far as flying or speed. They may also come naked neck, or rumpless.

In Peru, these birds can be found all over and are often shown in long knife fights almost weekly, as in Peru cockfighting is much like Baseball or Football in America. The gamefowl is usually bred by a team of five to six breeders and kept in small pens for about 3X3. When breeding the Peruvians the main thing in mind is gameness, with speed, power, cut, and aggressiveness to follow, and the main fault being endurance. Stags have to be separated early, as they will game up around 4 to 5 months.

Peruvian cocks can sometimes be man-fighters especially if not handled, which is why many Peru breeders will also keep cocks and hens separate only putting them in the same pen for breeding and then taking them back out. The Peruvian’s aggressive fighting style is what makes them favorite in crossbreeding with other American gamefowl breeds.

Rarely ever in Peru will you see any type of inbreeding taking place like often seen in America, they believe it weakens the birds and only out-breed to keep them strong. The Peruvian gamefowl has only recently been imported to the US and is only in the hands of a few breeders.

Peruvian gamefowl is also known as an exhibition fowl in Peru, though gameness is still one of the main focuses.

Peruvian gamefowl price in the Philippines

Although there are some who ship from the US, most of these bloodlines are already crossed. Cockfighting is illegal in the US and one can think why would someone from the US have a pure-breed Peruvian fighting rooster? yes, similar to the Philippines, there are remote places where cockfighting is held but it is highly unlikely and extremely rare. Only people who bet their lives would do that.

Gamefowl enthusiasts will find ways to get a purebred from South America though but the current pandemic restrictions are too tough to ignore.

The cost of Peruvian breeders in the Philippines (if you can find a good line of breed) is around P175,000 to P250,000 for one male and 2 females at around 5 months old (ready to lay). This is highly expensive for ordinary Sabungeros but for people who have deep pockets, this is nothing.

Sometimes, the popularity of the Peruvian gamefowl also comes as a result of gullibility. Although it is highly popular, American bloodlines are still the leaders in this field so why spend a lot of money on something that is half-proven?

The Peruvian gamefowl fever will be here to stay but it cannot change the fact that its popularity is not yet backed by a proven record similar to what American breeds have achieved.

Where to buy Peruvian fighting cocks

This question is always hard to answer unless you are a die-hard Sabungero with a lot of contacts. I advise you should not to search online because it is highly likely that you will get scammed. The only thing to do is to ask your fellow Sabungeros, especially those who have Gamefarms and other big breeders.