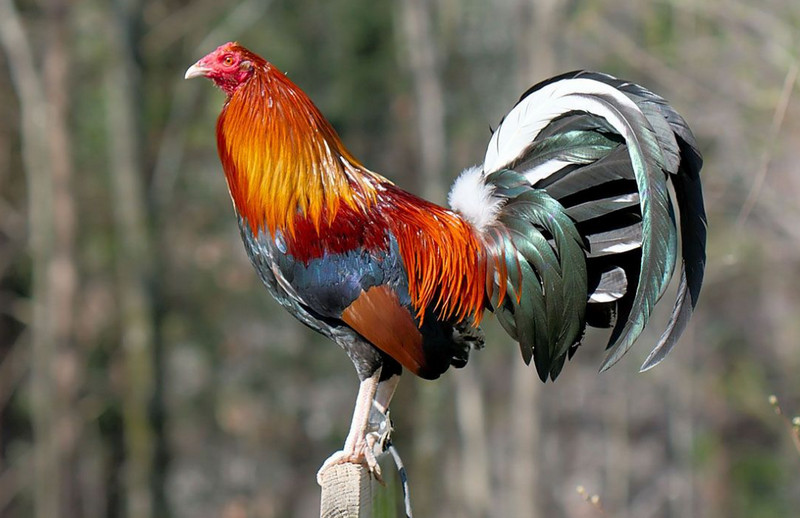 Whitehackle roosters are one of the most sought-after breeds of fighting gamefowl, and for good reason – they are powerful, courageous, and graceful athletes in the arena! Their white feathers and reddish-brown hackles give them a stunning appearance that is hard to ignore.

When looking at a Whitehackle rooster, one cannot help but admire its physique – it is an imposing creature with a fierce, muscular body. Its head is crowned with a vast mane of feathers, and its reddish hackles are quite spectacular. Its tail is composed of a dozen or more long, narrow feathers that are sleek and smooth.

These beautiful birds have a fighting style that can best be described as aggressive and assertive. They are not afraid to take the initiative when facing off against their opponents, and their powerful blows can be felt from their powerful legs. Whitehackles are well-known for their exceptional strength, and they can stand their ground against even the strongest of opponents.

When they are in the midst of battle, Whitehackles show a remarkable coordination of footwork and agility. They move swiftly and smoothly around the arena, and they can make fast, sweeping movements that can surprise and unbalance their opponents. It is this combination of power, agility, and coordination that makes Whitehackles such formidable warriors in the ring.

There is no doubt that Whitehackles are magnificent gamefowl. With their strength, speed, and expertise in the ring, it is no surprise that they are some of the most sought-after birds in the sport of gamefowl fighting. Those who have been lucky enough to witness a Whitehackle in action have seen just how impressive and powerful these birds can be.

History of the Whitehackle Rooster Breed

The Whitehackle Rooster is a particular breed of gamefowl that has been around for centuries, first appearing in the United Kingdom. This magnificent breed of the rooster was so popular with farmers and poultry fanciers over the years that it quickly spread across Europe, eventually finding its way to the United States.

Although the exact origin of the Whitehackle Rooster is up for debate, some believe that the breed is descended from an earlier breed of gamefowl, the Old English Game. Old English Gamefowl was bred for their strength and agility, making them ideal for one-on-one fights. The Whitehackle Rooster was then bred with this gamefowl to produce a larger, yet still agile and strong bird.

The Whitehackle Rooster is known for being an incredibly aggressive bird. Some have described its fighting style as “explosive,” and it has become renowned for its ability to quickly strike its opponent with devastating force. In fact, its fighting style was so legendary that it was once even described as a “flying tiger.”

The Whitehackle Rooster was originally bred to participate in cockfights, and it quickly became one of the preferred types of gamefowl among poultry fanciers. It was so popular that, in the late 1800s, the Whitehackle Club of America was established, specifically for the purpose of promoting the breed.

Legend tells us that the Whitehackle gamefowl was brought to America by a British ship captain who had purchased them on a trading expedition to China. It is believed that the breed originated in Asia, where they were prized for their hardiness and their superior fighting abilities. Once they arrived in the United States, their popularity only grew. In the late 1800s, the Whitehackle gamefowl was so esteemed that some of the first cockfights in American history were held using the breed.

The Whitehackle rooster quickly developed a reputation for its fiery fighting style and intelligence. They are known for their tenacity and determination in the ring, often taking on opponents many times their size. They are also noted for their remarkable speed, agility, and stamina.

It is no wonder that Whitehackle roosters have become so popular throughout the years. For any fan or breeder, the Whitehackle gamefowl is a bird that will never disappoint. This resilient and versatile breed continues to be one of the most sought-after birds in the world.

The primary weapon of the Whitehackle rooster is its feet. It dances on its opponent while kicking, pecking, and slashing in all directions. During these dance-like movements, the Whitehackle keeps its wings close to its body, providing an effective shield that its opponents must penetrate. The Whitehackle can also make use of a powerful jump, which it uses to surprise its opponents and gain the upper hand.

The Whitehackle rooster is also a master of defense. It circles its opponents, avoiding their strikes, and relying on its agility to evade and counterattack. Additionally, the Whitehackle uses its wings to deflect strikes from its opponents and to protect its head and body. While this rooster is a master at attack, it is also an expert at defense, making it a formidable opponent in the ring.

In conclusion, the Whitehackle rooster is a powerful and agile fighter. It uses a combination of effective strikes and active defenses to outmaneuver its opponents. The agility and speed of this rooster make it a real force to be reckoned with in the gamefowl world.

The Whitehackle rooster is known for its own unique style of ground fighting, which is commonly referred to as the “Whitehackle Style”. This style of fighting is characterized by a series of quick, powerful strikes that can quickly disable an opponent. The Whitehackle will often attack the legs and body of its opponent, targeting the weaker parts of the body. This makes it very difficult for an opponent to stand up and defend against the relentless onslaught of the Whitehackle’s strikes.

Whitehackles also have remarkable endurance and can maintain their attacks for long periods of time. If an opponent is able to survive the initial attack, the Whitehackle will often maintain its attacks for the duration of the fight, often outlasting its opponent.

The air attack is a powerful move that can be seen in Whitehackle gamefowl, especially in Whitehackle roosters. This maneuver is a spectacular display of speed, agility, and brute strength, as the bird launches itself into the air and barrels towards its opponent in a show of kingly determination.

At the outset of the battle, the Whitehackle will spring off the ground and soar, wings outstretched. During the flight, its beak is wide open with a powerful clacking sound, and it will immediately target its adversary. It’s no surprise that this maneuver is named the air attack.

Once the bird is airborne, it will remain at a certain height and width and will attack with immense speed. Although the bird may be approaching its opponent at a great rate, its feet remain close to its body during the attack. As it bears down on the other bird, its wings are stretched to the max and its beak is wide open.

Upon impact, both birds will lock up in what appears to be a death grip, with both birds gripping each other’s back and neck with their legs and wings respectively. As both birds are locked in a tug-of-war type of situation, both wings and legs will quickly be used to strike each other with a flurry of powerful blows.

The aim of the air attack is to not only inflict physical damage on the opponent but also to try and break the death grip both birds have on each other. The Whitehackle gamefowl will use its wings to try and break away and gain an advantage over its opponent.

The air attack is a breathtakingly beautiful sight and is a testament to the prowess of the Whitehackle gamefowl. This attack is not only a demonstration of physical strength and skill, but it also is a symbol of courage and determination in the heat of battle.

In closing, Whitehackle roosters are a unique breed of chicken that has an exciting fighting style. From their bold personalities to their fierce fighting tactics, these birds have been a part of the agricultural culture for over a century. Their fascinating ground and air attack methods have evolved over time, making them one of the most powerful opponents in the cock-fighting arena. With a long and storied history behind them, Whitehackle roosters give new insight into a very specialized and visually stunning art form. Whether you are a fan of the sport or a spectator, one thing is for certain – Whitehackle roosters always put on an impressive show.