There are several bloodlines of Brown Red gamefowl especially today that many local breeders are crossing with different modern breeds.

The heritage breed of Brown Red games, however, traces its lineage to rural Alabama in the 1870s, where a local “cocker” imported a pure line of game fowl from Northern Ireland. Over the years he crossed these Irish birds into American gamefowl strains and produced what is now known as the Brown Red games. These beautiful, aggressive birds are slowly declining in number since cockfighting became illegal in all states when Louisiana banned the practice in 2008.

Joe Wingate brought over from Northern Ireland a pure strain of chickens in 1870 into his Alabama farm. These birds were mostly brown-red in breast and feather color, with some showing ginger colors, but all showing dark legs and hazel eyes. The hens in particular were sharp and stylish looking, all of them dark brown or ginger and some showing straw neck feathers. The stock was medium stationed and many grew spurs. 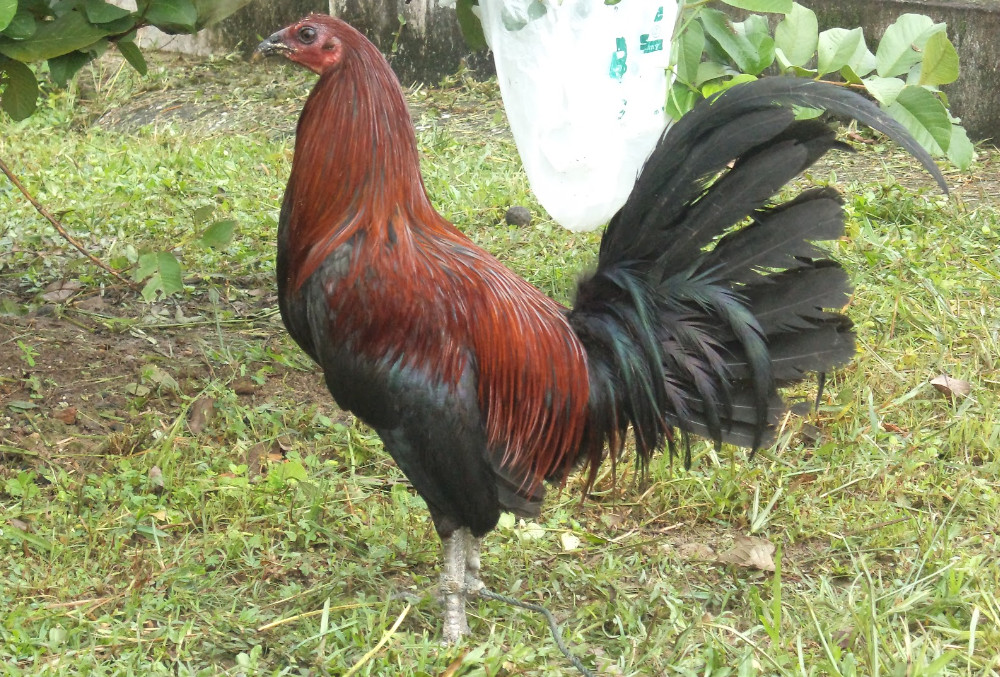 One of the Irish hens among his flock was Joe`s personal choice and he even had the chicken set up and mounted when she died as a memento of her best breeding days. This stuffed and preserved progenitor of the Brown Red bloodline is still on display but it looks nothing like the modern generation hens of the Wingate bloodline of Brown Reds.

The roosters of this family were not big cocks weighing in at 5.4 lbs. or under. Joe Wingate made the effort to improve the bloodline by crossing with an English hen, mahogany-colored and with dark legs, then line breeding to the original line to keep the stock intact and with new vigor. The line from this mix was brown feathered or ginger red-breasted had dark legs and hazel eyes like the original Irish gamefowl be shipped in. They were broad-backed and not heavy, though strong-boned.

These fighters were quick off the drop, fast and strong in the mix-up; with the cocks just rushing at their enemy with wild-cutting attacks that don’t stop. They break for defense but don’t fly high.

The line-breeding with the English hen made for heavier fighters, around 6.2 lbs. Then, to further enhance the Wingate stock, Mr. Holly Chappell from Alabama took a winning fighting cock from one of his trips to the South and brought it back home to breed with hens that were north Britain and brown-red crosses. Friends with Joe Wingate, he lent Joe one cock from the cross and this was bred to a Brown Red hen from the mahogany chicken cross. After reducing the new cross a bit, Wingate bred the Chappell experiment into his own Irish stock. The final offspring becomes the beloved Wingate Brown Red speed slasher we all know and love.

Joe Wingate passed on in 1924 and left behind a brooding fowl that many cockers still treasure as a purebred stock as well as a base for breeding better gamefowl.

Some questions related to gamefowl

What makes a brown-red gamefowl?

The color brown-red, just as black-red comes from the English pit description of fowl to be fought in the pit. Breast color always is first named as it is not trimmed in any fashion. So the literal description of a brown-red is a brown-breasted fowl with a red top.

Where did the brown-red gamefowl come from?

Joe Wingate brought over from Northern Ireland a pure strain of chickens in 1870 into his Alabama farm.

What is a lemon gamefowl?

A medium-stationed gamefowl is known for its smart fighting style and an offbeat sense of timing where it catches its opponent off-guard with powerful single-stroke killing hits. It is known as a vertical flyer and is known to sidestep and counterattack.

What breed are red roosters?

There’s a wide range of red chicken breeds including the Rhode Island Red, New Hampshire Red, ISA Brown, Red star, Production Red, Derbyshire Redcap, Welsummer, and Red Leghorn. But all of them don’t have pure red color, rather, have a shade of red in their feathers.