The Royal Palm turkey is a breed of domestic turkey. One of the few turkeys not selected primarily for meat production, this breed of turkey is well known as an ornamental bird with a unique appearance, largely white with metallic black bands. Kept primarily as a show bird, or on small farms, it lacks the size necessary for large-scale commercial use. Pachos typically weigh 16 to 22 pounds and females 10 to 12 pounds.

Cröllwitzer Turkeys are active birds, thrifty, excellent seekers, and good fliers, males are characterized by being non-aggressive, females are generally very good mothers, hens lay pale cream to medium brown eggs with spots, and they are also good as pets.

Turkeys of this type are birds of a relatively smaller size than other specimens, with a very beautiful appearance. They are primarily white in coloration with sharp contrasting metallic black edges on the feathers. The lower part of the back is black, which provides a contrast with the white base color of the body plumage. 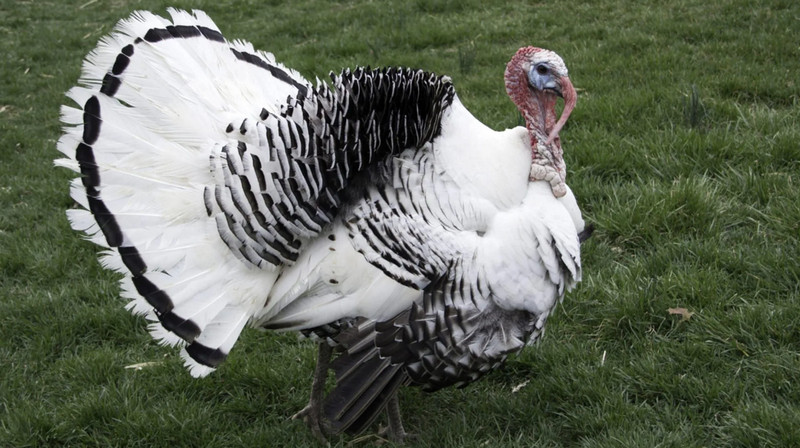 The tail of the Cröllwitzer turkey is pure white, with a stripe of black and a border of white on each feather. Its head, throat, and beard are red and its beak is horn-colored. The live average body weight of mature male Cröllwitzer turkeys is about 7.25 to 10 kilograms. And the average live weight of mature hens ranges from 4.5 to 5.5 kilograms.

This bird, relatively new to turkey breeds, first appeared in the 1920s on a Lake Worth, Florida farm, apparently as a cross between black, tan, Narragansett, and native turkeys.

Years of selective breeding followed to stabilize coloration, and the Cröllwitzer turkey was eventually accepted as a breed by the American Poultry Association’s Standard of Perfection in 1971. In Europe, a turkey of similar coloration is sometimes called Cröllwitzer or Black-Cord White Turkey.

Along with the decline of most inherited turkey breeds following the adoption of the wide-breasted white turkey breed by the turkey industry, Royal Palm turkeys today are an endangered breed. The breed is classified as “guarded” by the American Livestock Breeds Conservancy. It is also included in Slow Food USA’s Ark of Taste, a catalog of heritage foods in danger of extinction.

Both Australia and the United States report the breed as Endangered to the Food and Agriculture Organization of the United Nations. The male specimens of this breed of turkey are characterized by being non-aggressive, and the females are particularly good mothers.

Royal Palm turkeys are active, excellent foragers, and good fliers. Standard weights are 16 pounds for young males and 10 pounds for young hens. Cröllwitzer turkeys have not been selected on purpose either for growth rate or for musculature, being used primarily as a display variety.

The Cröllwitzer turkey lacks the commercial potential of the other varieties, but it does have a role to play on small farms, for domestic meat production, or where its ability to control insect pests would be of value.

The Cröllwitzer turkey is one of the few breeds of turkey that is not raised primarily for meat production. It is raised as an ornamental bird, mainly for display purposes and also on small farms.

Royal Palm turkeys belong to a breed of domestic turkeys that originated in the United Kingdom. It is one of the few turkeys that is not raised primarily for meat production. It is best known as an ornamental breed with a unique appearance. The breed is raised primarily as a show bird, and they are also often seen on small farms.

The Royal Palm breed of turkey has been in the United States since the 1920s in Florida. These birds were probably bred from European turkey breeds (due to the similar characteristics between the English turkey and other individuals. The Cröllwitzer turkey color pattern is available in all three breeds. And the turkey color was not standardized until the decade of 1920.

Royal Palm turkeys are dynamic and very good at finding their food. They are also very good flyers. Males are not very aggressive, and females are especially good mothers. Hens lay eggs that are pale cream to medium brown with spots. The breed has not been purposely selected for meat production.

This breed of turkey lacks the commercial potential of the other varieties, but it does have a role to play on small farms. It is also good for the home production of meat and for the control of domestic insects.

The Royal Palm turkey was recognized as a breed by the American Poultry Association in 1971. Today it is classified as a “Threatened” animal on the American Livestock Breeds Conservancy’s Conservation Priorities List. And furthermore, the breed is considered endangered all over the world, although the total number is gradually increasing. However, you need to reach a considerable number.

How big do Royal Palm turkeys get?

Royal Palm Turkeys are relatively small compared to other turkey breeds — mature toms weigh 15-20 lbs., and hens are considerably lighter at 10-12 lbs. The babies are whitish to bright yellow birds.

Can you eat a Royal Palm turkey?

What are Royal Palm turkeys known for?

The turkeys have red to bluish white heads, a light horn beak, light brown eyes, red to bluish-white throats and wattles, and deep pink shanks and toes. The beard is black. These thrifty turkeys are active, excellent foragers, and good flyers. Standard weights are 16 pounds for young toms and 10 pounds for young hens.

Unlike broad-breasted meat turkeys, Royal Palms can breed naturally, and the hens will go broody.

What do you feed a Royal Palm turkey?

Royal Palm turkeys’ average weight is between 10-15 pounds, making them a medium-sized breed that is easier to handle. You can train fairly wild turkeys to eat out of your hands with dried mealworms and millet seeds. They also love treats like romaine lettuce, grapes, and cabbage.

Considered a rare breed of turkey, the Royal Palm turkey is considered to be a little smaller than other heritage turkeys and fends for itself very well. They have a beautiful color pattern and are very useful around the farm for insect reduction.