Like its sister the Lionata, the Robusta Maculata was born between 1959 and 1965 at the Poultry Experiment Station in Rovigo; by selecting and crossing the buff Orpington and White Ameraucana. In this case, however, their plumage is totally different. This breed has become very popular in recent years, especially for its elegant appearance.

It is a rustic, medium-sized breed with slow-growing yellow skin and legs, which makes it ideal for extensive outdoor rearing for the production of quality meat.

The average weight of Robusta Maculata is around 4 to 4.5 kg in roosters, while hens are around 3 kg. 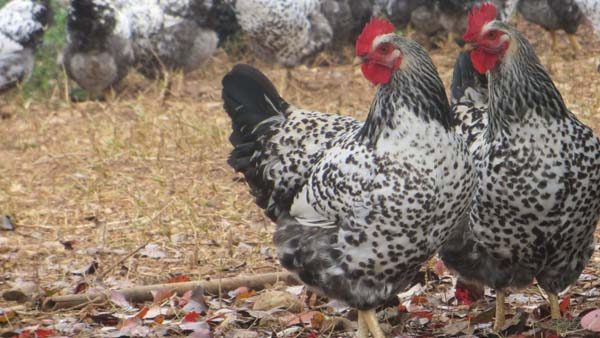 One of the most striking characteristics of Robusta Maculata is its plumage. Which is quite irregular and difficult to standardize. Very often the chicks are born either too white or with too many dark spots. The experience of many breeders leads to the belief that better results are obtained when crossing lighter roosters with darker hens.

According to old Italian standards, the Robusta Maculata is silvery-white, with black and silver neck cutouts, and irregular black or dark gray markings on other parts of the body. The tail and wingtips are black with a slightly dark green sheen. The skin and legs are yellow, the earlobes are red. It has a well-developed individual crest, with 6 to 8 points.

The Robusta Maculata is prized for being a wonderful dual-purpose breed, capable of meeting the needs of those looking for rustic and productive animals.

A rustic breed of large size and good attitude to adapt to both confinement and the open field.

The Robusta Maculata hen can produce up to 150 eggs per year, with a pink shell. It is quite a rustic and productive breed, perfect for organic farming, where it can give its best.

The Robusta Maculata was created between 1959 and 1965 at the Poultry Experiment Station in Rovigo, Veneto. It was conceived as a dual-purpose breed, and was derived from crossing the Buff Orpington with a commercial variety widely grown in Veneto in the 20th century, known in Italy as “America Blanca.”

A standard for Robusta Maculata was published by the now-defunct National Association of Bird Breeders, in the late 20th century, and was published with a historical note on the website of the Federation of Italian Associations.

The Federation of Italian Poultry Associations is the authority that governs poultry farming in Italy. In early 2012, the breed was not officially recognized by the FIAV.

Breed numbers remain low. A study published in 2007 revealed a figure of approximately 1,100 for the total breeding stock, of which approximately 300 were roosters.