The Polverara chicken, also known as Schiatta or Sciata, is an ancient breed of chickens from the town of Polverara in the province of Padua in Italy. They are very similar to the Brabanter chicken breed from the Netherlands. This traditional Italian breed is on the brink of extinction and survives thanks to a few dedicated breeders

The Polverara is a dual-purpose bird with a V-shaped feathered crest that towers over its head but does not cover its eyes. It has white earlobes, small red watts, a red face, and willow-green legs. This is a medium-sized breed quite similar to the Brabanter. 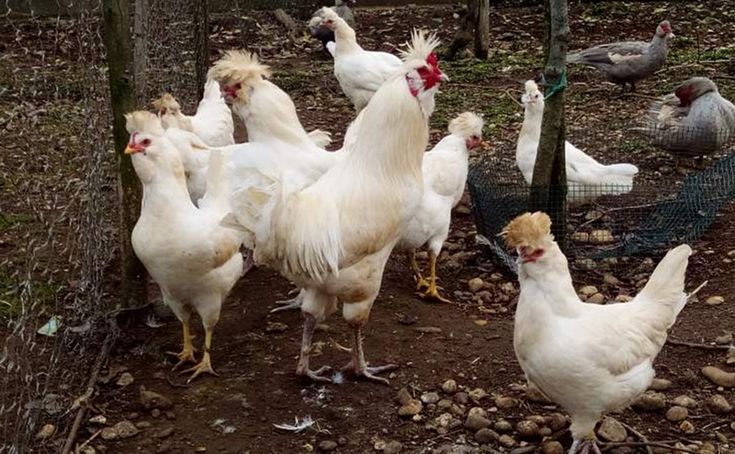 Two varieties of colors are recognized for the Polverara, black and white. The black variety has a deep black color with a strong dark green sheen; the legs are slate-green in color, and the bill is dark with black lines.

Both colored varieties have willow green legs and an impressive appearance that earned its place as one of the most fabulous and showy breeds.

The Polverara is a dual-purpose breed that does not adapt to confinement and prefers to live in the open field, it can even perch in trees. It is an easy breed to handle and an excellent pet for the little ones in the home.

Hens lay about 150 white eggs per year (the minimum weight of each egg is 50 g) but they rarely hatch. The meat of this breed is darker than that of other breeds, but it is delicate and tastes good.

This ancient Italian breed originated from a village in the county of Padua. Since 1400, it has been known as “Padana di Polverara”, “Schiatta di Polverara” or “Schiatta”. The early history of the Polverara race is still uncertain, as is its relationship to the Padovana.

The Polverara is a medium-sized breed, with a V-shaped feathered crest. According to some authors, the breed is the ancestor of Padovana. However, other historians claim that the Padovana developed from the Polverara.

The first reference to Polverara chickens is by Bernardino Scardeone (1478-1554), who writes about Saccisica: “This area is … famous for the abundance of chickens of notable size, particularly in the town of Polverara.” Alessandro Tassoni (1565-1635), in his simulated heroic poem La Secchia Rapita (“The stolen cube”, 1622) speaks of “… Polverara, in the kingdom of the roosters.”

A painting by Giovanni Agostino Cassana (1658–1720) in the Musei Civici Degli Eremitani in the city of Padova shows a woman spinning in a rural landscape, surrounded by a number of domestic animals, including a white crested hen that sits it looks a lot like a Polverara hen.

At the end of the 19th century, a decrease in the numbers of the breed was already evident, attributed to crossbreeding with other chickens. Despite several attempts by breeders to preserve it, and an annual incentive of 300 lire to be awarded to the best breeder from institutions that were fighting to preserve the Polverara breed in 1925; the numbers did not improve as expected and Polverara chicken continued to decline for most of the 20th century.

This breed must be raised in the wild, as it does not adapt well to confinement, this accelerated its near-disappearance until there were only seven left. Since the 1980s, new efforts have been made to recover and reconstitute it. ] It was included in the 1996 official standard of the Italian Federation of Italian Bird Associations, which is the governing authority for poultry farming in Italy. It is currently under the protection of the European Community.

Breed numbers remain low. A study published in 2007 revealed an approximate figure of 1,200 for the total number of breeders, of which approximately 300 were roosters.