The Padovana chicken or Paduan del Gran Ciuffo is a breed of chickens native to the province of Padova in northern Italy. The origins of the breed are still uncertain, but most historians agree that the breed is related to the Polish chicken breed.

The main characteristic of this breed of chicken is its peculiar crest; Roosters have a long, curved crest, while hens have a shorter, rounded crest.  The earlobes are small, whitish, and completely covered by the crest. The average weight is 1.8 to 2.3 kg (4.0–5.1 lb) for roosters, and 1.5 to 2.0 kg (3.3–4.4 lb) for hens. 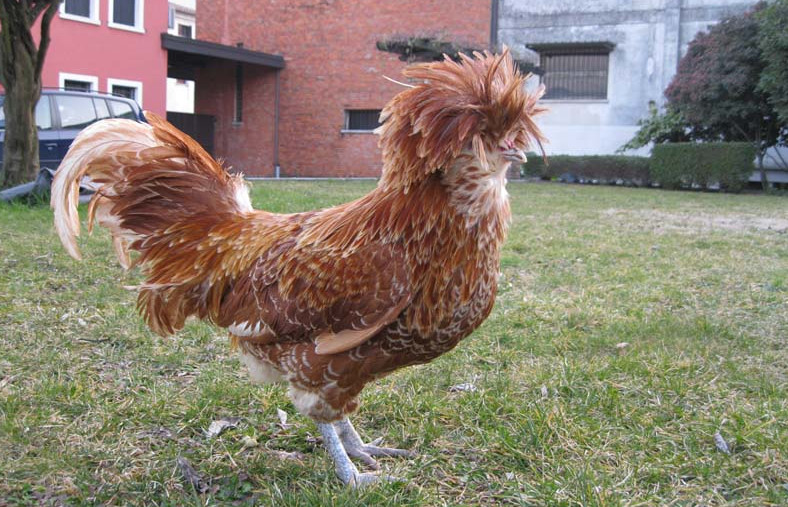 Nine varieties of colors have been recognized for Padovana, of which six are recognized and documented in older treatises, these are white, black, silver, gold, buff, and “hawk”. The skin is white and the legs are slate or black.

Today, Padovana is supported by the abundant eggs it produces, as well as its excellent meat. Padovana hens produce around 120-150 white eggs each year, weighing 50-60g, but they are rarely hatched. A bantam version is also available for this breed.

The origin of the breed is still uncertain, but most historians agree that the Padovana made its first appearance around the year 1300, when the astronomer and philosopher Giovanni Dondi dell Orologio, while in Poland, noticed a peculiar characteristic and beautiful in the hens of the locality, and I do not hesitate to take some specimens to the Padova region in Italy.

This theory was confirmed by many writers of the past (such as Teodoro Pascal), however, the journalist from Padova Franco Holzer in one of his investigations was able to establish that there is no documentation that certifies that Giovanni Dondi dell Orologio has visited Poland.

Another hypothesis of the origin of the breed indicates that the chickens would have arrived in the Padova region in the form of viaticum along with pilgrims from Eastern Europe, who were going to holy places of Christianity in Italy.

Historical notes also provide evidence of tufted birds in Europe in Roman times: the two marble figurines of tufted chickens observed in the Sala degli Animali (“animal room”) of the Vatican Museums in 1927 by Alessandro Ghigi date from the 19th century. I or II AD; a chicken skull excavated from West Hill, Uley, Gloucestershire in England shows the typical brain herniation of tufted breeds and dates from the fourth century.

Recently Franco Holzer discovered the first known representation of a hen with a tuft in Padova: it is a painting that dates from 1397 and is present in the Oratory of San Michele Arcangelo in Padova.

In the 21st century, the breed numbers remain low. A study published in 2007 revealed a figure of approximately 1200 breeders, of which approximately 300 were roosters.

Some questions related to Padovana chickens

They are great to have in the garden and will chicken about with you. Their friendly nature makes them naturally docile and they like human company. They can mix with most breeds including delicate bantams but always be wary of mixing any pure breeds and bantams with larger hybrids.

What color is a Padovana chicken?

The feathers of the Padovana chicken present themselves in a variety of stunning colors including gold, silver, ginger, black, white, and several others.