The Norfolk Black, also known as the Black Spanish or Black Turkey, is a British breed of domestic turkey native to England in the county of Norfolk, raised for its meat, originally black turkeys were a relative rarity among New World herds, however, Europeans were very selective about this breed until it became predominant.

Black turkeys are very strong and resistant birds, with a docile temperament, but some birds can become very aggressive, and they can be highly dependent on the selection by their breeder, today they are raised mainly for the production of meat since the meat has a superior flavor. The ‘black turkey’ is universally considered the most archaic breed of turkey in the UK. 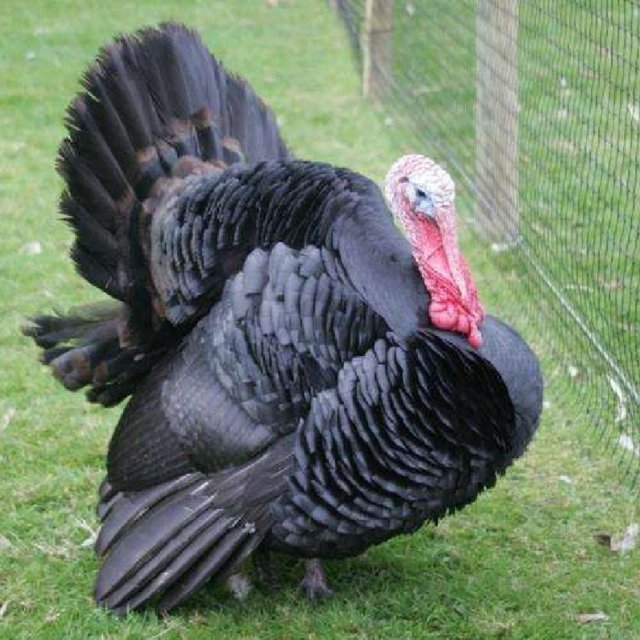 The black turkeys were sent to the holds of the ships on the transatlantic crossing from Europe to the New World and were raised by the first settlers, it is also possible that the turkey that was consumed in the first Thanksgiving meal was taken from between European birds, rather than among native wild turkeys, although both have common ancestors.

These turkeys are the tamest but tend to become aggressive over time, in case you add them to other aggressive flocks in the yard. They develop behavior to protect themselves from bullying. The plumage of this turkey is a shiny black with metallic reflections, and the bill is black and the caruncles red and well developed. The tarsus is bluish and blushes with age. Their eggs are creamy or slightly brownish with spots. It is a small to medium turkey, since the male does not exceed 10.5 kilograms.

Black turkeys are medium to large-sized birds with a very beautiful appearance. They have shiny, metallic black plumage with a greenish sheen on top and a dull sub-color on the back. It is not accepted or desirable to have a brown or tan hue or any white color. The live average body weight of mature male black turkeys is about 10.5 kilograms, and mature hens have an average weight of about 6.5 kilograms.

Young or poultry of this type usually have white or tan-colored feathers, but they turn black after molting. The black turkey’s bill is black, and the beard is bright red (changeable to bluish-white). In adult specimens, the legs and toes are pink. The eyes of these birds are dark brown, and although the plumage is black, the skin of the black turkey is generally white.

The first turkeys of this type were brought from America by the Spanish in the early 16th century, which is why the Norfolk black turkey is also called “Black Spanish” in England (Black Spanish). This rather light breed is the result of crossing with other continental black turkeys, in particular with the Sologne black turkey. It is the oldest turkey breed in the United Kingdom, prevalent in England, it is one of the breeds recognized by the British Standard for Poultry, it is considered rare in the United States, where it was recognized by the American Poultry Association in 1874.

Black turkeys became very popular in Spain, and were known as “black Spaniards.” These birds made the journey with the first European settlers, having been selected for meat production for more than two centuries. The base of the black turkey variety was formed in America once the variety was crossed with eastern wild turkeys. And throughout the 20th century, the black variety was commercially viable (although not as popular as the Narragansett, Bourbon Reds, Dutch Whites, and Tan varieties).

Black turkeys are a hardy variety of domestic turkeys. They have not been selected for production attributes for years. They are highly dependent on selection by the breeder. Careful selection for good health, the ability to mate naturally, and production attributes will restore this variety to its former stature. Most are docile in terms of temperament, but some birds can get a bit aggressive.

Today, the black turkey breed is raised primarily for meat production as its meat has a distinctive superior flavor that has captured consumer interest. However, you can check out the full breed profile of the black turkey.

They have the ability to adapt to different climates as they are very strong and tolerant of the weather. These birds have a slow growth rate but tend to be resistant to common poultry diseases.

The turkey breed is considered to have the slowest growth rate compared to others, so it is not suitable for commercial purposes. They take longer to mature and are ready for meat production. These birds have a good reproductive capacity and tend to reproduce naturally. They have good production attributes only if you take good care of them.

Today the breed is common in Europe but is considered an endangered turkey variety by The Livestock Conservancy. And the breed is also included in Slow Food USA’s Ark of Taste (a catalog of heritage foods in danger of extinction).

Is Norfolk Black the best turkey?

Named for its unusual shimmering green plumage, the Norfolk Bronze is arguably the finest example of turkey in the world and the proud centerpiece of Morton’s Farm.

What is the Norfolk Black turkey used for?

Although most commercially bred turkeys are modern broad-breasted birds, there are a number of farmers who raise Norfolk Blacks for meat. They are well known for the quality and flavor of the meat.

A range that is unique and exclusive to Sainsbury’s. This free-range turkey comes from producers inspected to RSPCA welfare standards by the RSPCA’s independently certified farm assurance scheme.

What is the tastiest turkey breed?

The Norfolk Black is widely regarded as one of the oldest turkey breeds. It is a slightly slower-growing bird but has a fantastic flavor that is slightly gamey to taste.

Is it good to have wild turkeys in your yard?

The birds eat many pesky insects, and a flock of turkeys nearby can be ideal pest control for a yard. Turkeys are also beloved for their association with the Thanksgiving holiday.