This bird owes its name to Narragansett Bay, New England. The Narragansett turkey is virtually unknown in Europe, where it has never been commercially raised, yet it is among the breeds recognized by the British Poultry Standard.

The Narragansett turkey is a breed of domesticated turkey that was developed in the United States. It was developed from a cross between the eastern wild turkey and the domestic turkey. It is a unique “historical strain” in North America. This type of turkey was never as popular as the Tan turkey, but it was still valued for commercial agriculture throughout the United States. 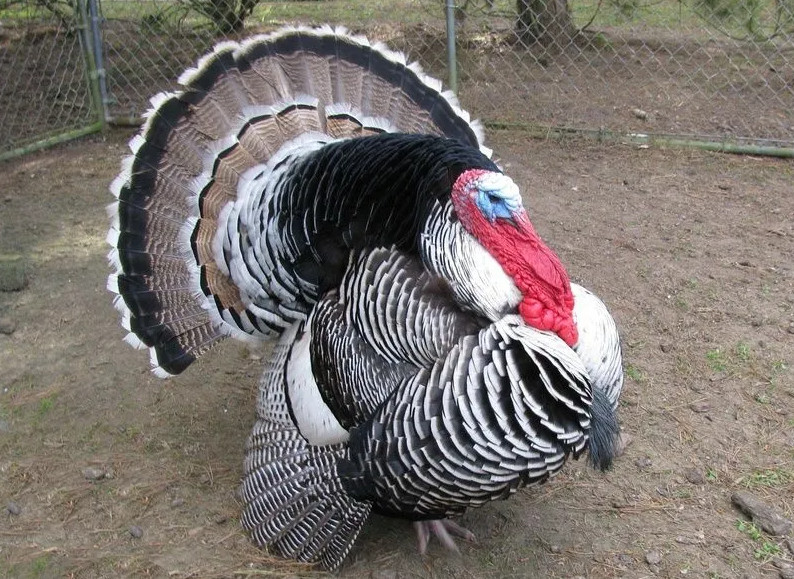 Narragansett turkeys became the foundation of the turkey industry in New England and were especially important in Rhode Island and Connecticut. The breed was also popular in the Mid-Atlantic and Midwest states and was recognized by the American Poultry Association in 1874.

Narragansett Turkey is named after Narragansett Bay in Rhode Island, where this variety of birds was developed. It is descended from the wild turkeys and domestic turkeys (probably the black turkey) brought to America by English and European settlers beginning in the 1600s. Improved and standardized in production quality, the Narragansett breed became the basis of the turkey industry in New England. Although it was valued across the country, it was especially important in Rhode Island and Connecticut.

The Narragansett turkey has plumage with black, gray, dark brown, and white feathers. It resembles the tan turkey but has matte gray or black feathers that replace the distinctive copper color of the tan turkey.

The Narragansett turkey breed sometimes has white feather bars on its wings due to a genetic mutation not found outside of the United States. It has a black beard, a horn-colored bill, and a mostly featherless head and neck that range from red to bluish-white.

The breed is prized for its excellent temperament that combines a calm disposition with good maternal skills. They mature early, they are good egg producers, they have excellent quality meat, and “when they are kept free, they do not stray too far from home.”

Improved through generations through selective breeding, young Narragansett turkeys weigh between 22 and 28 pounds and females between 12 and 16 pounds. They can run fast, fly well, and prefer to spend their nights sleeping in trees.

Although never as famous as the tan turkey, this breed was valued for commercial agriculture throughout the United States. According to an account from the early 1870s, flocks of up to two hundred birds were common. Narragansett turkeys were successful in foraging like crickets, grasshoppers, and other insects, and thus could be kept on little supplemental food.

In the early 20th century, the popularity of the bronze turkey grew even further and the Narragansett turkey soon became a rarity. It was not commercially cultivated for many decades until the early 21st century when a growing niche market was established for consumers with a “renewed interest in the biological fitness, survivability and superior taste” of Narragansett.

The Narragansett turkey is a very beautiful bird and is grown primarily for meat production. But some people also breed them for ornamental purposes or as a hobby. Narragansett turkeys are also known to be strong and very hardy birds.

Narragansett turkeys can run fast, fly well, and prefer to spend their nights sleeping in trees. They are excellent foragers and generally feed on insects, crickets, and grasshoppers. And they can be maintained with little supplemental food. However, you should review the full breed profile of the Narragansett turkey.

This breed is prized for its temperament, combining docility and maternal aptitudes, this turkey prefers to be raised in the open air, but it never strays too far from its shelter. This breed has been improved for generations thanks to a rigorous selection process. They also have early maturation, egg production, and excellent meat quality.

Just 50 years ago, they were well-regarded for their quality of production. This historic variety, unique in North America, deserves an evaluation for production in sustainable agriculture systems. The Narragansett turkey would make a useful and beautiful acquisition on a family farm. Threatening data is not known for this class of turkey at present.

In the Philippines, Narragansett Turkey is common among turkey farmers next to the Bronze turkey. Narragansett is one of the most adaptable turkey breeds in the Philippines and if you want to raise this type of bird, you can search Facebook groups and look for some offers. There is a breeder in Cavite who sells turkey eggs and ships all over the Philippines.

What makes a Narragansett turkey?

How do they behave? Narragansett Turkeys are known for their excellent temperament combining a calm disposition with good maternal abilities, although toms can become aggressive as they age.

What are the characteristics of Narragansett?

Narragansett turkeys have traditionally been known for their calm disposition, good maternal abilities, early maturation, egg production, and excellent meat quality. As recently as 50 years ago, they were well regarded for their production qualities.

Why is it called Narragansett?

At the beginning of the English colonization, the town site was merely part of a much larger territory called “Narragansett Country.” Most likely, the town simply adopted the name to distinguish itself from surrounding areas and villages, which had earlier selected appellations recalling their English heritage.

How big do Narragansett turkeys get?

The Narragansett turkeys have large bodies, long legs, and large fan-shaped tails. Their plumage is mainly black with grey and white edges. Males (toms or gobblers) grow to 48 inches tall and weigh around 25 pounds. Females (hens) are not as tall and weigh up to 18 pounds.