The Muscovy duck, also known as the Mexican real duck, Barbaria duck, or Creole duck, is a breed of tropical duck in Central America where it ranges from Mexico to central Argentina and Uruguay. It is used mainly for the production of meat because it has less abdominal fat and great muscle development. This characteristic makes it highly sought after by poultry farmers dedicated to the duck trade.

Its scientific name is “Cairina moschata” and it is called Bragado because it has a different tone in the lower part compared to the rest of its body. They are usually dark in color mixed with areas of white feathers. If you want to know more about the history, characteristics, and reproduction of the Muscovy duck, continue reading this article.

Since pre-Columbian times, this bird has been raised by rural communities in Latin America, being part of the backyard or poultry birds of rural homes in small lots. However, despite the fact that the Muscovy duck is native to Central America, currently, the biggest boom in commercial breeding of this breed is in Asia and Europe. For example, in France during the 1930s, they made great strides in genetic improvement for the production of Muscovy breed meat. Also, it is being used for the development of specialized genetic lines for hybridization with other races. 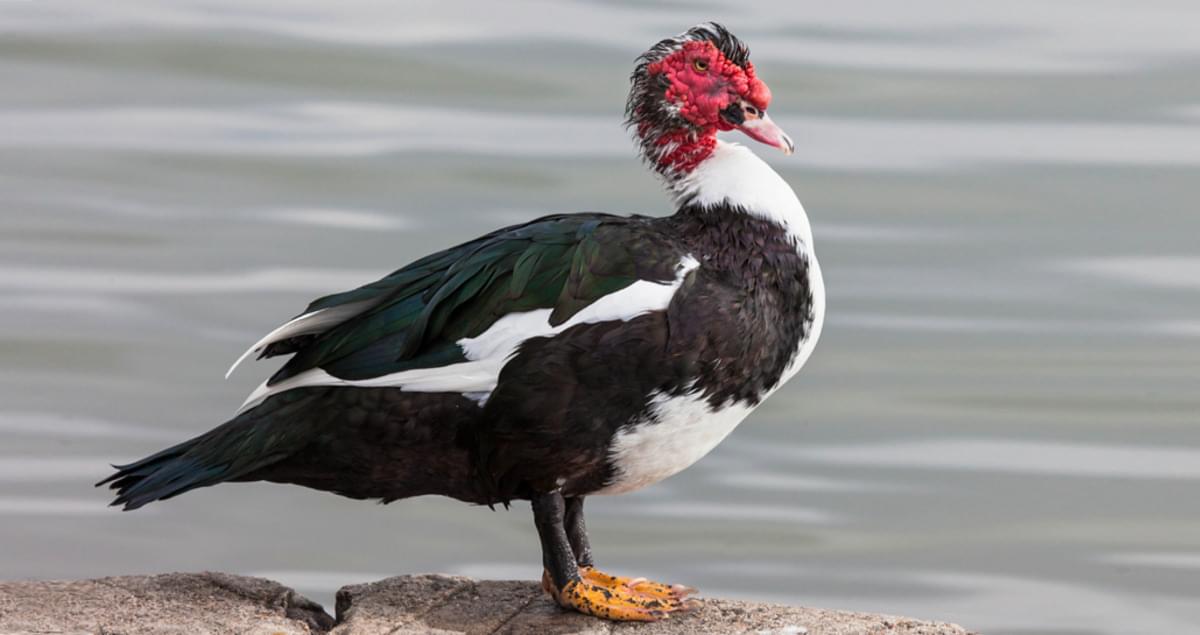 It is one of the most popular and sought-after breeds of ducks for the exquisite flavor of its meat and because it is easy to breed, its behavior is docile and it seldom becomes aggressive.

Some of the most representative characteristics of this breed are:

The muscovy duck is a fairly rustic bird, so it does not require sophisticated facilities for handling and breeding. It is a very precocious breed, fast-growing with high fertility and easy fattening, which is why it is considered one of the best breeds of fattening ducks since it makes good use of feed rations. Due to the above reasons, many duck breeders and farmers prefer to raise the breed.  In addition, it is quite resistant to diseases and adapts well to different types of climates. It is a calm, docile species and they are not very good swimmers.

Sexual maturity begins at 30 to 40 weeks of age, however, females reach full vigor at two years and their productive life can reach up to 10 years. If you are looking to obtain large eggs, it is recommended to wait for the beginning of the productive life of the females, which is up to seven months.

The hens have an average laying of 15 eggs, where the incubation has a period of time of 30 days. The birth of the ducklings occurs simultaneously and as soon as they are born they begin to follow the mother. In the wild, the ducklings together with the mother look for a nearby body of water and remain there for several months until the young are able to fly.

Productive characteristics of the Muscovy Ducks

Currently, the Muscovy duck is one of the breeds with great commercialization, this is due to its productive and organoleptic characteristics (flavor). Here are some of the advantages of breeding this breed.

It is a very strong breed against common avian diseases, it rarely gets sick, however, there are two viral diseases to which the Muscovy are very susceptible, which are the ones mentioned below.

Derzsy is a disease that is more common in geese but it has been found that Muscovy ducks are more susceptible compared to other breeds. It is a fairly contagious disease in young geese and Muscovy ducks. This virus causes severe inflammation in the membranes of the heart and liver of the animal, so if there is no effective or prior treatment it can be fatal in most cases.

This is another disease related to parvovirus, which damages the duck’s locomotor system, causes weight loss, and in extreme cases the death of the animal. This virus mainly affects ducklings between 1 and 3 weeks of age. To prevent this disease there are some duck vaccines that can be applied to the breeders.

In the Philippines, the Muscovy duck is one of the most popular breeds in backyard farming. Although commercial farmers grow Pekin Ducks, the Muscovy is preferred by backyard farmers due to its being disease-resistant. You can find Muscovy ducks being sold online, especially on Facebook. Its eggs are preferred in “balut” making due to their large size.

Can Muscovy ducks breed with other ducks?

Muscovy eggs require about 35 days to hatch. While Muscovies can be crossed with common ducks, their offspring are sterile.

What is the type of Muscovy breed of duck?

Surprisingly, Muscovy ducks are the only domestic ducks that are not derived from Mallard stock. The wild Muscovy has a distinct color palette of black and white. Domesticated Muscovy has many different colors. The males can grow to be quite large, weighing 10-15 lbs.

What is Muscovy duck used for?

The Muscovy has been raised for eggs and meat for a few hundred years now. It has the highest meat yield of any duck. The meat is 98% fat-free, is much less greasy than other ducks, and there is approximately 50% more breast meat than a standard duck.

The Muscovy Duck can lay up to 190 cream-colored eggs each year. These eggs can be anywhere from 1-2½ inches long and can weigh up to 2.7oz. Muscovies like to brood in the summer months and will often gather up to 16 eggs to incubate.

Do Muscovy ducks mate for life?

Ducks do not form long-term pair bonds, but instead form seasonal bonds, otherwise known as seasonal monogamy, in which new bonds are formed each season. Seasonal monogamy occurs in about 49 percent of all waterfowl species.

What is the lifespan of a Muscovy duck?

Both sexes have a bare black-and-red or all-red face. The male also has pronounced caruncles at the base of the bill. The average lifespan of a Muscovy duck is up to 20 years, that number is less attainable in the wild due to predation and injury.

A popular eating duck in Europe, the Muscovy duck (sometimes called Barbarie or Barbary duck) is thin-skinned, low in fat, and has deep red, mildly gamey meat which is sometimes compared to roast beef for its flavor, and veal for its tenderness.

Will Muscovy ducks fly away?

Most domestic ducks have been bred to be unable to sustain flight for any period of time, but many Muscovies still have the ability to do so. I have read stories of Muscovies flying off during migration season when they see other ducks flying away for the winter (I mean, who can blame them?).

What is Muscovy ducks’ favorite food?

Muscovies like to eat grass, weeds, insects, slugs, and snails. But they will also run down, catch, and eat mice and baby rats.