The Midget White Turkey is a breed of a domestic turkey named for its white plumage and small stature. The breed is the smallest standard variety of turkey, and with males around 13 pounds and females 8-10 pounds, it weighs only slightly more than larger chickens.

Midget white turkeys are a rare breed of heritage turkeys that are rated “Critical” by the American Livestock Breeds Conservancy and are also listed in the Ark of Taste, a catalog of endangered foods.

The white dwarf turkey is a breed of domestic turkey from the United States. Named for its white plumage and small stature, it is the smallest standard variety of turkey, and today it is a rare inherited breed of turkey. It was created in the early 1960s by Dr. J. Robert Smyth of the University of Massachusetts.

The breed was developed to meet anticipated demand for a small version of the wide-breasted turkey. Because this market did not develop as predicted, the Midget White turkey never became widely popular. 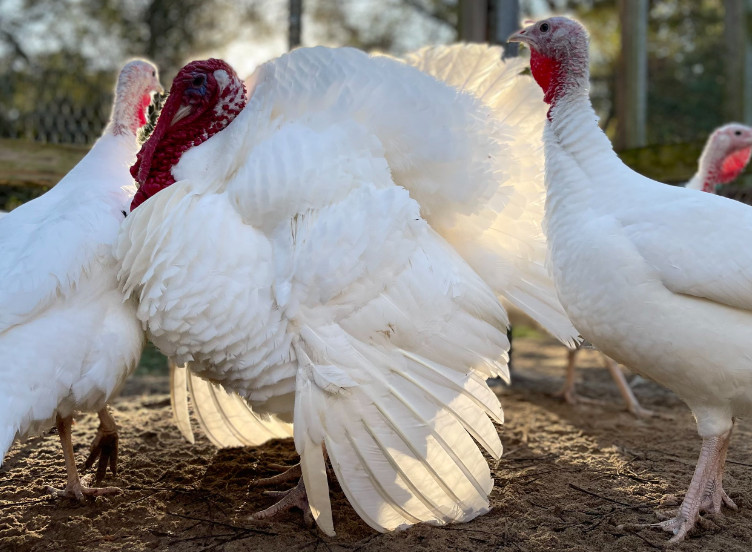 The Midget White turkey is sometimes shown in the same class as the broad-breasted white turkey, but despite the similarity, it was bred from different lines, mainly white commercial turkeys and other breeds. The bird is relatively friendly and is especially well adapted to being raised on small farms and on a family farm.

Midget White turkeys are relatively smaller birds. Weighing only slightly more than the largest roosters, they are also mainly white with a broad chest. They have the appearance of a miniature version of the wide-breasted white turkey.

The Midget White turkey was created in the early 1960s by Dr. J. Robert Smyth at the University of Massachusetts. It was developed to meet anticipated demand for a small version of the wide-breast turkey that is also white in color. Since this market did not develop as planned, the dwarf white turkey never became very popular.

These birds were added to the poultry program at the University of Wisconsin, which continued to refine and then set the standard for the dwarf white variety we know today. Dr. Wentworth is widely recognized for preventing the breed’s extinction. As Dr. Wentworth prepared to retire in the late 1990s, the university decided to disperse the herd.

Some were passed on to poultry hobbyists, but most of the flock was sent to the USDA poultry facility in Beltsville, Maryland. The Beltsville flock dispersed in April 2005 and the remaining birds were distributed to poultry enthusiasts located in the eastern United States.

The survival of this breed is now entirely in the hands of individuals. It is important to note that the dwarf white turkey has no genetic relationship to the wide-breasted white turkey and that the two breeds are distinct and must be managed separately.

Some birds have the ability to fly, so care must be taken to prevent them from escaping. But as they gain weight, adult turkeys are less likely to fly.

They are unusually friendly and generally approach people and pets without much concern. They are also especially suitable to be raised on small farms and on a normal farms. However, you can take a look at the breed’s full profile on a poultry farming website.

Dwarf white turkeys are a relatively energetic and hardy breed of turkey. They were selected for increased egg production by a fertility and hatchability center in Wisconsin. Hens lay an average of 60 to 80 large eggs per year, with a hatchability of 75 to 80 percent.

The eggs of these types of turkeys are pale cream to medium brown with spots. Care must be taken when raising dwarf white turkeys in breeder selection to retain the small size of the breed.

The Midget White turkey, with its broad chest, has the appearance of a larger, white miniature commercial turkey. This quality gives the variety good meat production and turns the white turkey into a fine table bird.

The dwarf white turkey is a relatively new breed, it is the result of the cross between the white-breasted white turkey and the Cröllwitzer turkey. It is classified as “Critical” by The Livestock Conservancy, and the breed is also listed in the Ark of Taste, which is a catalog of endangered foods.

As recently as 2014, the BBC reported that these birds were thought to be extinct until around 90 of them were found in Alabama. However, you can check the full breed profile on a poultry website.

What is midget white turkey used for?

The Midget White turkey is a meat breed, and it is raised mainly for meat production.

What is the tastiest turkey breed?

What is the rarest type of turkey?

The Auburn, also known as the Light Brown, is a breed of domestic turkey. A heritage turkey, the Auburn is one of the rarest varieties currently in existence. It has been referenced by name in written records since the 18th century and is named after the light reddish-brown color of its plumage.

In recent years, Midget Whites have developed a reputation as a friendly, small-flock turkeys with excellent food qualities, perfect for raising in backyards and on urban homesteads.

The flavor of a bird is determined by several additional factors, which may actually be more important than whether your turkey is fresh or frozen. Size is key — smaller birds tend to be more tender; if you have a lot of guests coming, think about cooking two small turkeys instead of one large one.