The Mandarin Duck (Aix galericulata) is a small bird of a family of forest ducks, this animal is a species of perched duck native to East Asia. It is medium in size, 41 to 49 centimeters (16 to 19 inches) long with a wingspan of 65 to 75 centimeters (26 to 30 inches). It is closely related to the North American wood duck, the only other member of the genus Aix.

The Chinese refer to Mandarin ducks as Yuan-yang, they are often prominent in oriental art and are regarded as symbols of affection and marital fidelity. Since, after mating, they remain in a couple for the rest of their lives.

A Chinese proverb for couples uses the Mandarin duck as a metaphor: “Two Mandarin ducks playing in the water”. The reason for this metaphor is that, unlike other species of ducks, the male Mandarin duck stays with the partner it has mated with until the eggs hatch and even helps in caring for the ducklings. Even when both parents take care of the safety of the little ones, most of them cannot reach adulthood. 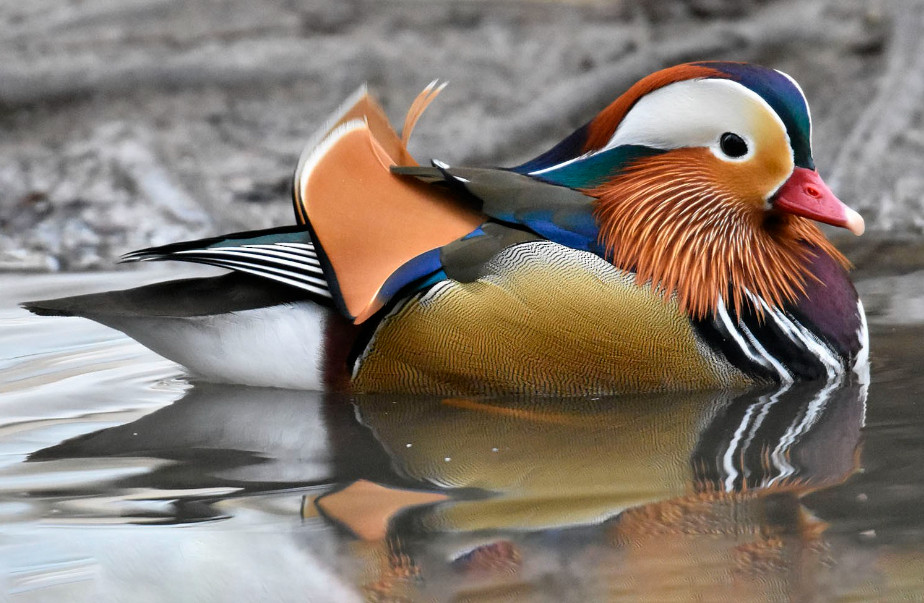 The common duck (Aix galericulata), is a medium-sized duck, closely related to the common duck, this duck is 41 to 49 centimeters long and has a wingspan of 65 to 75 centimeters.

The adult male is a striking and unmistakable bird, it has a red beak, white stripes over the eyes, a reddish face, and “whiskers”. The chest is purple with two vertical stripes, and the flanks are pink with two orange stripes running down the back. The female is similar to the female of the common duck, with a white ring around the eye and draw on the back of the eye, whitish at the bottom, with a small white band on the side and whitish also at the tip of the bill.

In the wild, mandarin ducks are found in densely wooded locations near lakes, wetlands, and ponds. They nest in tree cavities near water. During spring, females lay their eggs in tree cavities after mating. Males do not participate in incubation, leaving the female alone to care for the eggs. However, unlike other species of ducks, the male does not completely abandon the female, leaving her only temporarily until the chicks hatch.

The Mandarin duck is a small duck that weighs between 0.4 and 0.7 kilograms, the wing length of adult mandarin ducks varies between 210 and 245 millimeters. The plumage and details of the male stand out from other brightly colored plumage ducks. The male has a crest on his head and has a brighter color than the female, there are other old-fashioned names such as: “Chinese duck”.

The adult male has a red beak, a large white crescent over the eye, and a reddish face and whiskers. The male’s chest is purple with two white vertical bars, and reddish flanks, and has two orange “sails” on the back (large feathers that stick out like ship sails). The female is similar to the female wood duck, with a ring in the eye and a white stripe coming out of the eye, but it is paler underneath, it has a small white stripe on the flank and a pale tip on the bill.

Both males and females have ridges, but the purple crest is more pronounced in the male. Like many other species of ducks, the male undergoes a molt after the mating season in molting plumage. In molting plumage, the male looks similar to that of the female but is distinguished by its bright yellow, orange, or red bill, the absence of a crest, and a less pronounced eye stripe.

Distribution and Habitat of Mandarin Duck

The original range is found in East Asia. In Russia, the Mandarin Duck nests in the Amur and Sakhalin regions (both in Sakhalin and presumably in Kunashir), Khabarovsk, and Primorsky Krais. It nests in small numbers in Shikotan, where it has also developed human-induced landscapes. The Mandarin duck is a migratory bird in the north of its range, and adult and juvenile birds usually leave the Russian Federation in late September. Winter in China and Japan. Wild mandarin ducks did not breed in North Korea in the late 20th century, although they were not regularly observed during flights.

In 2008, the world population is 65,000 ducks: 2,000 lived in China, 10,000 in Japan, 7,000 in the UK, and 1,000 in Brandenburg. It is said that the European population is already larger than the Asian one. The largest colony in Europe is in England, and on the mainland, in the Berlin area. It is also found in Belgium, the Netherlands, Italy, and Switzerland.

This duck inhabits forested mountain rivers with overhanging tree branches and mountain forests on the banks of the river. The Mandarin Duck swims well and sits high in the water with its tail slightly raised. She rarely dives unless she is injured. Its flight is fast and maneuverable, it takes off with ease, sometimes almost in a straight line. Unlike most ducks, the Mandarin can often be seen sitting in tree branches or on coastal cliffs. Hunting the Mandarin duck is prohibited, it is listed in the Red Book of Russia as a rare species. This duck is raised in parks as a decorative bird.

It feeds on shellfish, worms, fish eggs, and seeds of aquatic plants.

As a general rule, the nests are arranged in hollows at different heights, sometimes up to 15 meters; less frequently they nest on the ground. Birds rarely nest in the same hole for 2 consecutive years. The clutch of mandarin ducks contains an average of 9.5 eggs (possible variations between 7 and 14), which the female incubates for approximately 32 days.

The hatching chicks jump from the nest by themselves to the ground. The reproductive success of mandarin ducks is affected by weather conditions, and chickens are very sensitive to hypothermia.

Hunting and nest-destroying raccoon dogs have an impact on reducing the number of mandarin ducks at breeding sites in Russia. Many hunters shoot mandarin ducks because they mistake them for a different species, as it looks different in winter plumage.

A pair of mandarin oranges called “yuanyan” in Chinese, where “yuan” is masculine and “yang” is feminine, symbolizes a pair of mandarin ducks for life, it is a symbol of loyalty. Because of this, they are often depicted in art.

The Chinese proverb about a couple in love is “two mandarin ducks playing in the water.” Ducks decorate the room for a Chinese wedding, symbolizing the desire for eternal fidelity and happiness in marriage.

Because the feathers of males and females are different, the word “yunyon” is used in Cantonese to denote a strange couple, as well as a mixture of strange ingredients, for example, this word refers to a drink that is a Hong Kong coffee and tea mix with milk.

This species of duck was widespread or distributed in East Asia, but large-scale exports and the destruction of the forests that served as habitat have reduced its populations in Russia and China to less than 1000 pairs in each country, however, in Japan, there are still approximately 5000 pairs.

In their natural habitat, mandarins breed in densely wooded areas near lakes, swamps, or shallow ponds. They nest in cavities in trees close to the water and during the spring, females lay their eggs in the tree cavity after mating.

A single clutch of nine to twelve eggs is laid in April or May. Although the male can defend the female and her eggs during incubation, he does not incubate the eggs himself and abandons them before they hatch. Shortly after the duckling’s hatch, his mother flies to the ground and coaxes the ducklings out of the nest. After all the ducklings are out of the tree, they will follow their mother to a nearby body of water.

Specimens often escape their herds, to the point that a wild population of about 1,000 pairs settled in Britain in the 20th century. Although this is of great importance for the preservation of the species, these birds are not protected in the UK because they are not native to the country. There is also a wild migratory population of hundreds of Mandarin Ducks in Sonoma County, California. This population is the result of several mandarin ducks that escaped from captivity and began to breed in the wild.