Before imported breeds arrived in the Philippines, we have Tagalog and Bisaya. These are the local terms for our native breeds. If you are in Luzon, you call it Tagalog, and if you are in the Visayas and the bigger part of Mindanao, you call it Bisaya. Both of them refer to the native chicken that we often see roaming around our rural neighborhood.

The government and even the private sectors are doing their best to conserve and even populate these breeds. The West Visayas University (WVU) in Iloilo for instance is breeding Darag and distributing chicks to interested individuals and groups. The Department of Agriculture (DA) and Bureau of Animal Industry (BAI) also continue to distribute native chicken breeds to rural areas of the Philippines in an effort to uplift livelihood programs and also to conserve and promote our local breeds. 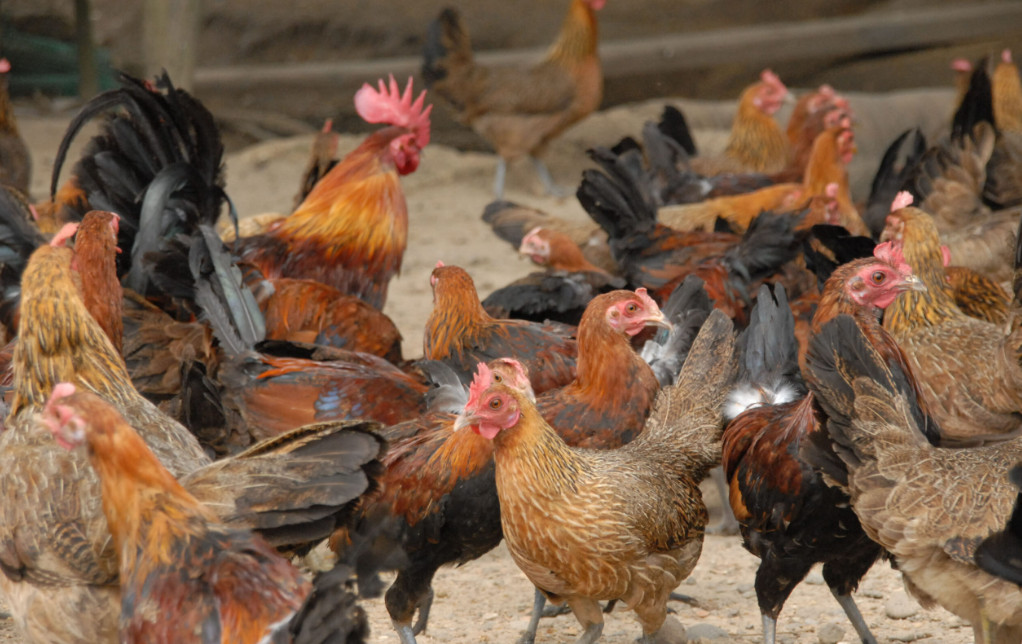 Regardless of whatever American breeds we have, the taste of our native chicken is still the best. If you are planning to venture into native chicken farming, here are the lists of local chicken breeds to look at.

Darag is arguably the most popular native chicken breed for backyard raisers in the Philippines. 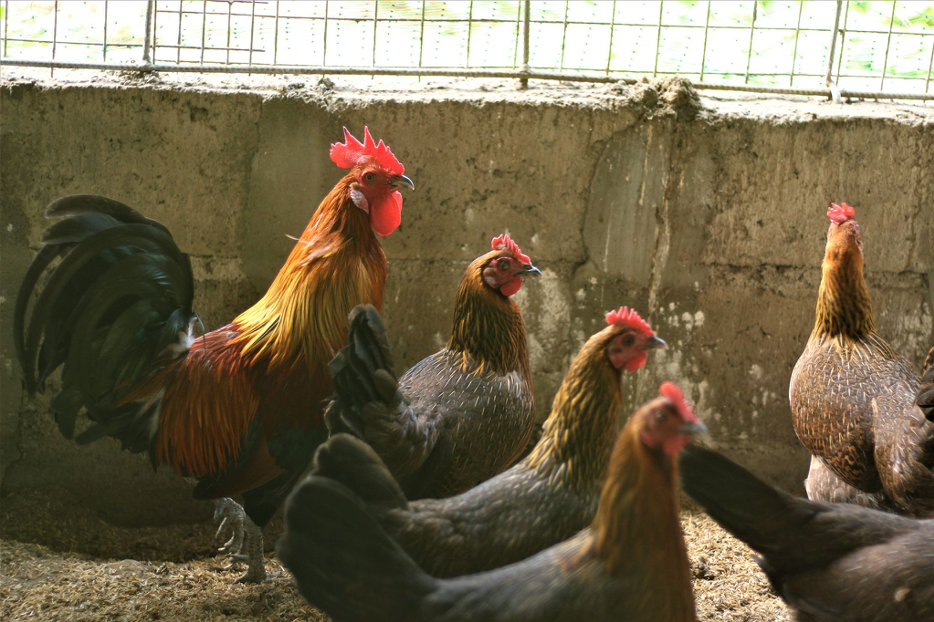 Drag, a native chicken breed found in Iloilo, Panay, Negros, and Guimaras has captivated the taste buds of both locals and foreigners alike. Prominent yellowish-brown plumage for females and shiny red for males, black tail feathers, and grey shanks describe the Darag. Best known for its unique flavor, taste, and meat texture, it has become famous as an alternative enterprise for commercial chicken.

Researchers of the Food and Nutrition Research Institute of the Department of Science and Technology (FNRI-DOST) led by Ms. Ma. Elena G. Fernandez saw the need for science and technology (S&T) based information that has to be generated to enhance the production and utilization of the Philippine native chicken. The chemical basis of the chicken meat’s superiority in nutritional and sensory properties must be provided, Ms. Fernandez added.

The results of the study showed that Darag chicken meat, when cooked, contains less fat, is high in protein, is rich in potassium, and has more unsaturated fatty acids. The majority of the consumer-type panelists rated the Darag chicken meat, cooked as tinola, a “like very much” approval in terms of flavor and general acceptability.

For those who are health-conscious, lactating mothers or those simply looking for a distinct taste in chicken, try Darag native chicken and find out why it is the pride of Western Visayas. Famous local Darag delicacies are tinola, litson manok, tinu-om, and chicken inasal.

Government researchers have paid special attention to the Darag from Panay. The Philippine Council for Agriculture, Aquatic and Natural Resources Research and Development (PCAARRD) has allocated funds for research to develop a package of technology that could improve productivity. And as reported by Dr. Synan Baguio, OIC of the Livestock Research Division of PCAARD, Darag has been purified after several years of breeding and selection.

The modern Darag is now more or less uniform in the color and pattern of its plumage, body conformation and size, predictability of growth, adaptability to the natural environment (resilience to extremes of climate and foraging behavior), and other traits that contribute to the predictability of performance. There is today a Darag chicken raisers’ association in Panay that could push the commercial production of the fowl to meet the big demand for its meat and eggs. Their production, however, is still short of the demand. This means there’s a very good business opportunity for investors big and small.

Research funded by PCAARRD had come up with a package of technology that is science-based, including judicious breeding techniques, hatchery systems, natural feeds, botanical dewormers, enhancement of the free-range area, and more.

Banaba is an indigenous chicken found in the Quezon and Batangas provinces, the northern part of the Philippines. According to the latest findings, the Banaba shows promising characteristics in terms of egg production and growth. The Banaba fowl is a straight-combed breed. Black-breasted with red-orange hackle feathers in roosters. Hens are wheaten in color and straight-combed. Black Tail feathers on both sexes. Straight-comb with bright red earlobes; can have white earlobes. Stands upright with slate-colored shanks. Plumage colors may vary.

One of the great advantages of native chicken breeds like Banaba over imported pure breeds and hybrids is that our native chickens are used to tropical climates. This is also the reason why they are stronger against diseases compared to imported breeds.

The Bolinao chickens are predominantly found in the province of Pangasinan hence it is named after Bolinao town. The adult male has red plumage with black breasts and tail feathers. The hackle feathers are bright orange. The feet range in color from slate to gray and have usually straight spurs. The earlobes are bright red. The female has light brown plumage with black tail feathers and a yellowish-brown back. The earlobes are usually white and the feet are slightly slate. Both sexes have well-placed wings which are carried close to the body. Roosters are popularly raised for cockfighting. 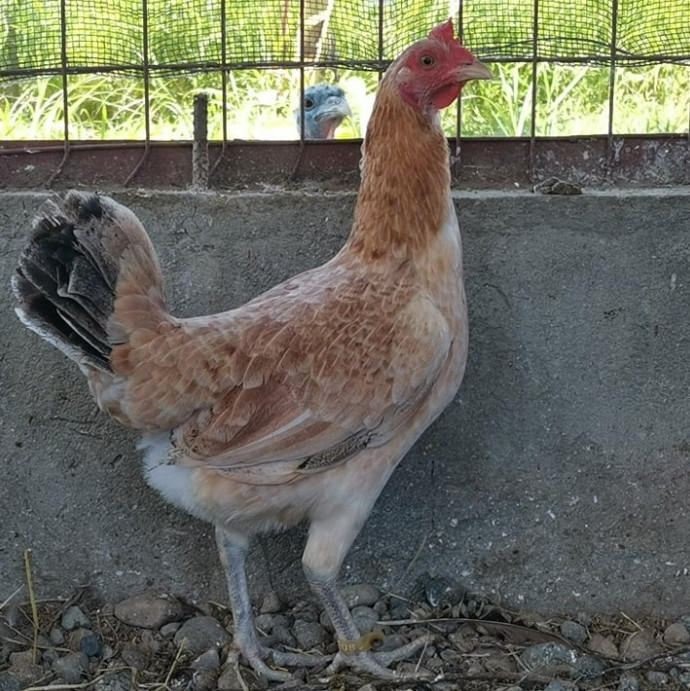 Bolinao day-old chicks weigh about 26g. At 12 weeks, the males weigh about 862g while females weigh about 701g. The first egg is laid about 184 days old. The average egg weighs about 30g. The hed-day egg production at 40 weeks old is about 24.3% with eggs weighing an average of 41g. Percent fertility in semi-confinement is about 70%. Body weights at 40 weeks of age for males and females are 1.95kg and 1.57kg respectively. The rate of depletion during the laying period is about 6%.

Local government and other private sectors are giving the effort to populate this type of breed, especially in Northern Luzon.

The Mariano Marcos State University (MMSU) and the Bureau of Jail Management and Penology (BJMP) in this city have agreed to put up a demonstration project for Bolinao chicken production inside the compound so that inmates would learn how to raise this high-value bird both as recreation and livelihood activity.

The project is under the “Sustainable Production, Marketing and Utilization of Improved Bolinao Native Chicken in the Ilocos Region,” which is funded by the Department of Science and Technology — Philippine Council on Agriculture, Aquatic and Natural Resources Research and Development (DOST-PCAARRD).

As a whole, the Bolinao chicken project in the Ilocos region aims to help empower climate-resilient farmers and animal raisers in various rural communities by providing them with technologies and skills in raising this high-value native chicken for commercial production. 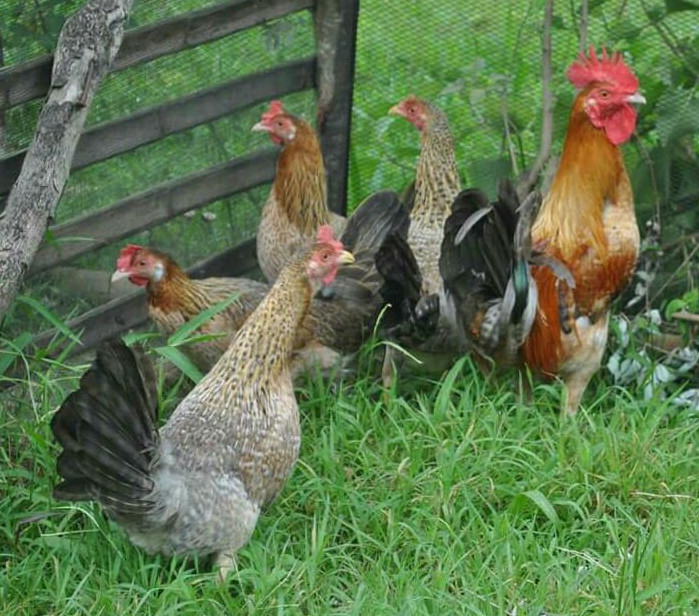 Although Camarines is bigger, taller, and heavier compared to other native chicken breeds, it is the least popular and one reason could be the rarity of its pure breed. Some groups in Bicol are trying to populate the pure Camarines breed to conserve their local heritage chicken breed.

Joloanon, which is also referred to by Ilonggos as “Jolo”, is a tall chicken breed with tricolor plumage. Its rooster is very popular among gamefowl breeders as they use it to cross with imported gamefowls. Like Paraoakan, there is not so much difference aside from color.

It is believed that Joloanon and Paraoakan came from the same source and the color only differs over time due to multiple crossbreeding.

The Paraokan (or Parawakan) chicken originally comes from Malaysia and was introduced to the Philippines in the 14th century by Arab missionaries and Muslim traders. It is currently farmed mainly on the island of Palawan, but it can also be found in the provinces of Maguindanao and Lanao del Sur and on the islands of Basilan and Jolo (for this reason, the breed is also known locally as Jolo).

Compared to other native poultry breeds in the Philippines, the Paraokan chicken is the largest. It has long legs, a larger body, a head than other local breeds, and an elongated neck.

Unfortunately, Paroakan chickens are farmed mainly for their use in local sports, especially cockfights, rather than as a food source. They are usually black, but can also have reddish feathers similar to Joloanon. Cocks can grow to 3-5 kg and usually, after 6 months since birth, they are already 1.2-1-3 kg. They have a much slower growth pace than commercial and industrial breeds. This slower growth means that they develop a stronger muscular structure.

These chickens were considered a valuable good by the families in the Mindanao region and their meat is found in many traditional recipes on the island of Palawan.

Do you know about these chickens? There might be other chicken native breeds but so far, this list is the one recorded in books so far.