The Kosovo Longcrower is a breed of chicken native to the Drenica area of ​​Kosovo. Before 2011 it was a difficult breed to find, however, today it has spread throughout Europe. Due to its unique feature (long song), it became very popular with poultry farmers. The roosters will start crowing after six or seven months.

The main characteristic of the Kosovo Longcrower is its long song that lasts an average of 20 to 40 seconds, but there are records of roosters that can crow for 60 seconds. In the third year of the bird’s age, the song begins to shorten.

It has a V-shaped (feathered) crest that slopes forward. Their beak is yellow (or gold), or even white, while their feet are mostly olive green and gray. The variety that has green feet always has a golden yellow bill, and a long-lasting song, which even exceeds 1 minute. The rooster’s tail has longer, sword-shaped feathers and is held straight (horizontal with the body). 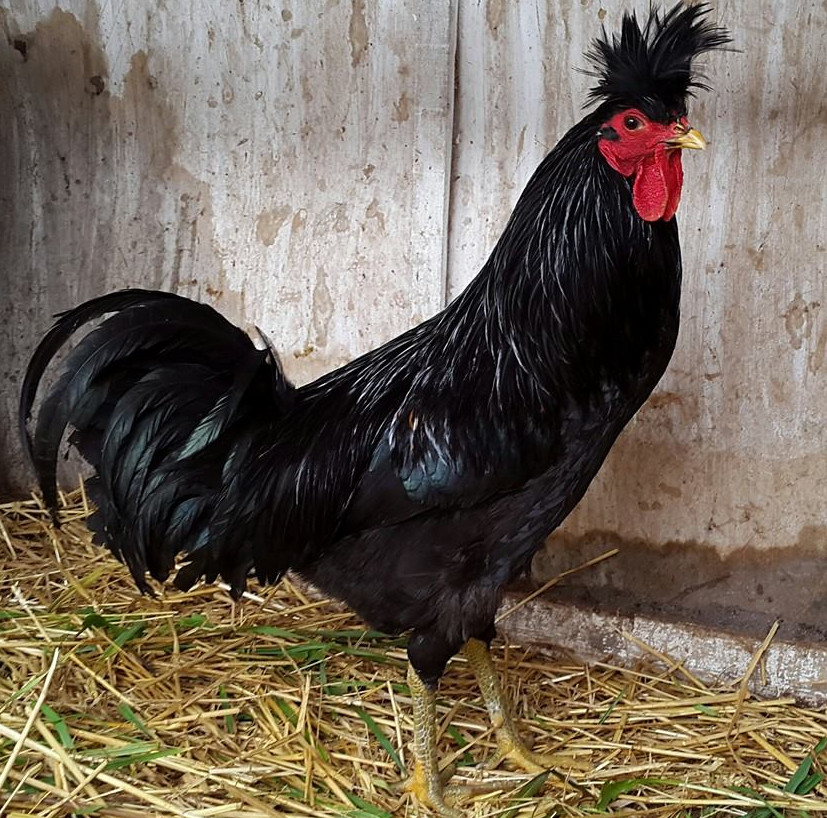 The Kosovo Longcrower is only available in the black variety. The rooster may have some red or gold feathers on the wings. Over time, white spots may appear on their feathers, which is a sign of the breed’s aging.

Kosovo Longcrower hens lay a regular number of eggs in their first year (about 160 white eggs weighing 55 to 60 g each). As it ages, the number drops to 50-70 eggs per year. Kosovo chickens rarely hatch and do not lay eggs until their eighth month.

The Kosovo Longcrower is an ancient long-singing breed that developed as a local breed in the Drenica area of ​​Kosovo and is therefore commonly called the Drenica Rooster in the Albanian language. Before 2011, she could rarely be found outside her hometown. However, fans of the breed began importing hatching eggs from Kosovo to Slovakia and the Czech Republic, where a strong population of around 80 birds was established.

In the following years, due to its impressive song, the breed became very popular and spread rapidly throughout Europe.

The Kosovo Longcrower hen is not profitable in relation to its production of eggs, for this reason, many families stopped raising them and imported other commercial breeds of dual-purpose chickens, which are more profitable, in relation to eggs and meat.

This is one of the reasons for its near-disappearance; The second reason is that the highest concentration of people of the Kosovo Longcrower race is in the cities because in the cities it is easier to get jobs. People lost interest in keeping the breed in the cities, for which the breed was on the brink of extinction.

Currently, the breed is kept in the following countries and is no longer an endangered breed: Austria, Bosnia and Herzegovina, Croatia, Czech Republic, France, Germany, Kosovo, Macedonia, Montenegro, Poland, Serbia, Slovakia, and Sweden. The largest number of birds is still kept in the Czech Republic and Slovakia.