The Chabo, also known in many parts of the world as the Japanese Bantam, is a breed of chicken native to Japan. It is a legitimate bantam breed, which means there is no standard-size counterpart. The word “Chabo” means bantam, dwarf, or miniature in Japanese.

The Chabo is a breed of miniature chicken with a large crest, extremely short legs, and an elegantly arched tail. It has a large, upright tail that slopes forward on the body creating a V-shaped appearance. The wings are large and in combination with its short legs, they make the wings touch the ground. Its legs are yellow.

Chabo’s crest and earlobes are generally large in roosters and medium-sized in chickens. And they are bright red. Its unique crest shows us five well-defined points that are standing. Their eyes are dark brown or reddish in color and their beak is in shades of yellow. His skin color is yellow.

Due to their large crest, they are prone to frostbite. During winter, they should be kept indoors and warm. It is generally a gentle bird and does best in hot climates. 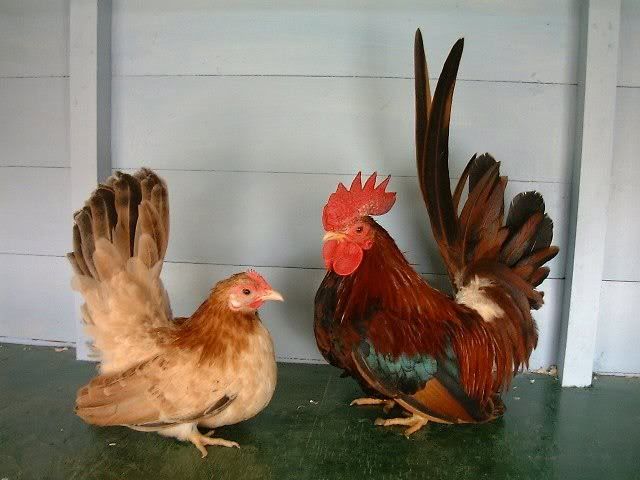 The Chabo is mainly kept as an ornamental breed. They are excellent pets. Originally bred as luxurious garden birds of the aristocratic class of Japanese society. It can be a difficult breed of chicken to keep for new poultry farmers due to its shape. And their plumage is difficult to perfect and requires extra care and attention.

The Chabo is a bird that is easy to tame, although roosters can be aggressive. They are not a robust breed and are good fliers.

Chabo hens lay a regular amount of white eggs (about 100 eggs per year weighing 23-31g each). They tend to hatch their eggs and are exceptional mothers. The breed suffers from a lethal gene combination that renders 25% of the chicks unable to hatch.

The Chabo or Japanese bantam is a legitimate bantam breed known for its size, extremely short legs, large crest, and striking arched tail. He is also known as Chabo, Shojo Chabo, and Katsura Chabo. The word “Chabo” means bantam, dwarf, or miniature in Japanese.

As its name suggests, the ‘Chabo’ is a breed of chicken native to Japan. These ornamental birds have come a long way in history. They are believed to have first arrived in Japan from China in the early 1600s when they began to appear in Japanese paintings. In Japan, they are called “Chabo” which means “bantam” or “dwarf” in Japanese, but it is also Japan’s old name for Southeast Asia. It is believed that they arrived in the United Kingdom in the 1860s and the first Japanese Bantam Club was formed at Crystal Palace (London) on November 12, 1912. The club was not active during the two World Wars but then resumed. activities. The club briefly merged with the Frizzle club in 1946, but this did not last long. The current Japanese Bantam Club of Great Britain was formed in 1961.

The sheer beauty of this breed is probably why they have graced the gardens of the Japanese aristocracy for centuries, and it is also the reason why they are one of the most prized roosters breeds in courtyards and bird shows today.

How many eggs do Japanese Bantams lay?

They are a true bantam breed, with large upright tails that often reach over the chicken’s head. Japanese bantam lay around 75 lovely tiny eggs per year.

Useful to Know: A true Bantam that is easy to tame but suffers from a lethal gene combination that causes 25% of chicks to be unable to hatch. Not a hardy bird, can be a good flier. Breeding for good types (especially short legs and correct tail angle) is not easy. For these reasons, not recommended as a beginner’s bird.

How big does a Japanese Bantam get?

Japanese Bantams are very small and petite chickens with very short legs, large combs, and an arched tail that is nearly as big as they are. Hens typically only weigh up to 1.1 pounds while Roosters are just slightly heavier and can reach up to 1.3 pounds. The breed only reaches about 12 inches at maximum height.

How long do Japanese Bantam live?

This is a domesticated bird that does not have a natural distribution, but can now be found in captivity almost all over the world. The average lifespan of these birds is between 7 and 8 years. The main diet of these birds is corn however they will take any commercial seed products.

Are bantam chickens good for beginners?

Bantam chicken breeds are a great choice for beginner chicken keepers. They cost less to keep, are easier to handle, take up less space and make great pets for kids!

They lay only about one small, bantam-sized egg in a creamy white color each week. Breeding these birds is extremely challenging as the genes for their characteristic tail and short legs have very complex relationships. Hens do make wonderful mothers. Temperament: Japanese Bantams are pure delights.