The Jangmigye chicken is a peculiar breed of long-tailed bird originating from the Confederacy of the Small Mahan States of ancient Korea (modern North Korea). In some regions of Korea, it is known as Ginkkori-Dak. At present, the breed is mainly bred for ornamental purposes. Although, their numbers are still low.

The Jangmigye has many similarities to the German Phoenix breed, which developed from Japanese long tails. The Jangmigye have a simple red crest. The earlobes can be described as a combination of red and white. Their legs are dark gray or lead. They have reddish-brown eyes and the color of their skin is yellow. 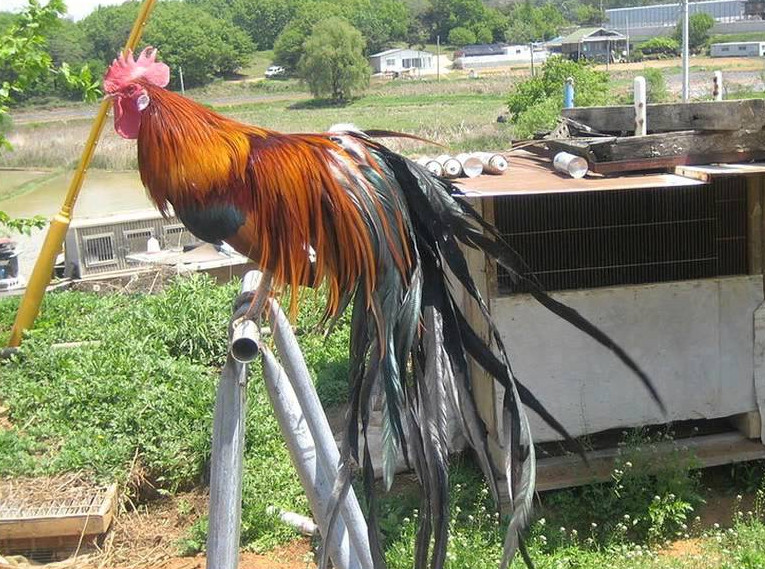 The Jangmigye is a beautiful breed that appears in a single-comb variety with Black, Black, or White-breasted plumage. Their plumage is extremely beautiful, but what makes them wonderful is the fact that their tails are immense.

It is said that a king of Korea first propagated this strange bird three centuries ago by crossing a pheasant with a wild bird. After obtaining the desired strain, the king placed a large bounty on the heads of these beautiful birds and the breed became extinct. This allowed the king to be the sole exclusive keeper of the long-tailed birds, and for generations, it has been a royal pastime to care for and pet them.

Japan and Korea have great respect and admiration for long-tailed birds. And they have been brought to their current wonderful state of perfection through over a thousand years of careful nurturing and improvement.

Breeders of the Jangmigye breed have the record of a bird whose tail reached the length of twenty feet, with a few inches above for good measure. These tails are almost always magnificent, gleaming in rich bronzes and crimson and gold, and the breeders keep them wrapped in thin rice paper to protect them so they are not bruised or smudged.

The breeding of these peculiar birds began in Korea shortly before 1000 AD, and for many centuries the royal industry was favored by the royal house, and great honors and riches were bestowed on the man who succeeded in raising a particularly fine specimen. Consequently, for years there have been families in Korea who did nothing, generation after generation, except raise long-tailed birds. And naturally, they became incredibly skilled at it. The breed is supposed to have originated from some wild birds, but its origin is still uncertain.

In Japan, the art of producing these long lines was rewarded with extravagant generosity. On the island of Shikoku, one of the largest of the Japanese group, the ruler of Tosa Province, the Daimyo, used the best tail feathers as ornaments for his spear and each tail feather had a deep meaning, for what a bit The heraldry and etiquette system was built around long-tailed birds.

As the birds’ feathers develop, their keepers place their tails on high perches, which are continually raised as the tail grows, so that it never touches the ground. It is quite harsh on these beautiful birds and again exemplifies the old Asian proverb that there is no great achievement without the corresponding pains.

The Japanese have studied the subject so thoroughly that they have even come up with the best foods to feed their birds to produce the longest tails.