Bronze Turkey  (also called Standard Bronze) belongs to the domestic turkey breeds that originated from crosses between the domestic turkeys brought by European settlers to the Americas and the eastern wild turkeys that they encountered upon arrival.

They are very strong and tenacious specimens, with a docile temperament, but some birds can become aggressive, highly dependent on selection by the breeder, today bred mainly for meat production, these turkeys are long-lived birds, and relatively slow to grow.

The bronze turkey is the most admired breed of domestic turkey among many people around the world and its ravishing appearance makes it astonishing when compared to others. The impressive bird is believed to derive its name from the patterns and colors of its plumage. However, there is little information about the breed.

It should be noted that both the broad-breasted bronze turkey and the standard bronze turkey are included on the poultry-keeping list as they are becoming increasingly rare. The intention is to protect heritage turkeys for future generations. 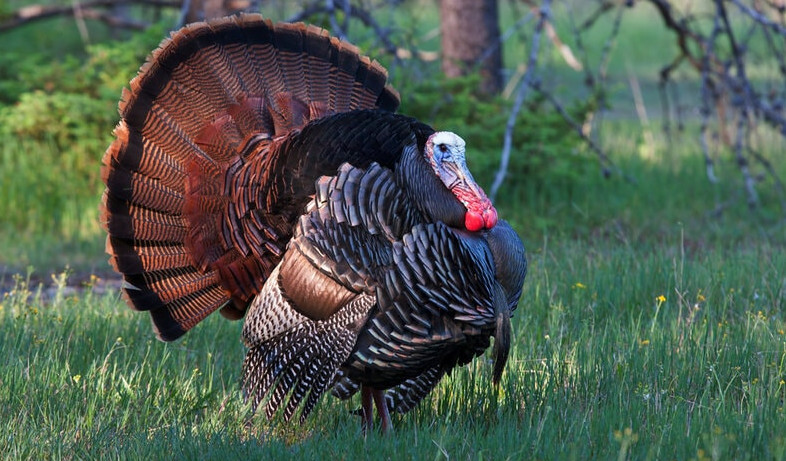 The bronze turkey is a medium to large-sized bird with a majestic and imposing appearance. They are very beautiful birds and well known for their unique plumage, these birds were selected for their large size, and the much larger birds became known as broad-breasted bronze turkeys, and the cute little birds were the standard bronze turkeys.

Aside from the difference in size, the plumage of the standard bronze turkey is generally lighter and more glossy than that of the broad-breasted bronze turkey. Both varieties have a brown color that is enhanced by coppery and blue-green tones, and the plumage, in general, is very similar to that of the wild turkey. The average live weight of mature bronze turkey hens is about 7.25 kilograms. And the average live body weight of mature males is around 11.5 kilograms.

The standard bronze turkey has been the most popular variety of turkey for most of United States history. It originated from crosses between the domestic turkeys brought by European settlers to the Americas and the wild turkeys they encountered upon arrival. The hybrid vigor of this cross resulted in turkey populations that were larger and more vigorous than European birds and were also much tamer than wild turkeys.

The copper or bronze-colored metallic sheen, which gives the variety its name, was part of the heritage of its wild ancestors.

Standard bronze turkeys are strong and hardy birds. They are long-lived birds and mate naturally (but today they have lost the ability to mate naturally due to their large size, and the wide-breasted variety that exists today is fully maintained by artificial insemination ).

They are relatively slow-growing animals, they were used for commercial production for decades until the early 21st century. But the breed continued to dominate the commercial turkey industry for 20 years after its development (until the wide-breasted white turkey became the breed of choice).

These domestic turkeys are very calm and docile and are known to socialize well with other herds on the farm as they are not aggressive. They have even been considered the best poultry for beginning farmers, as they are easy to tame and handle.

The wild breed genes present in the breed make them hardy and robust in many types of habitats. They tend to have the ability to withstand any type of weather as well, this bronze turkey has the ability to adapt to different climates in a short period of time.

Both males and females are slow to grow, if you are in need of increasing your herds then this breed is not the right one for you. Since you have to feed them well so that they get fleshy after a while.

Bronze turkeys, also known as standard bronze turkeys, have been further left behind by the turkey industry naturally through mating, although the breed is long-lived but slow to grow.

Raising herds of both broad-chested bronze birds and standard bronze turkeys is a breeze. The good thing about the breed is that they are hardy and robust. However, it is necessary to keep the chicks of these turkeys under hot conditions so that they can stay healthy and strong at all times. Proper care and management will allow them to quickly get out of the delicate stage.

The necessary amount of food needs to be provided for both adults and chicks to ensure adequate distribution of nutrients in their diet. Turkeys tend to drink a lot of water and it is recommended to provide them with clean, fresh water. Also, remember to vaccinate them to prevent them from contracting common poultry diseases. A good shelter is also mandatory so that they are protected from potential predators and harsh weather conditions.

The standard bronze turkey is one of the more popular turkey breeds in the Philippines among turkey farmers along with Narragansett. If you are looking to buy turkey in the Philippines there are Facebooks Groups dedicated to turkeys.

What type of turkey is a Bronze turkey?

Bronze turkeys are the product of crossing domestic turkeys brought from England, with wild turkeys. These matings produced a bird that was larger and more robust than the European turkeys and tamer than wild turkeys.

Broad-breasted turkeys (whether White or Bronze) require artificial insemination to reproduce, a result of the meaty breast which presents an obstacle for natural mating.

Is a Bronze turkey better?

Bronze turkeys tend to be more traditionally reared and are usually free-range. Like their Black cousins, they are famed for a distinctive gamey flavor and moist meat, but also have a firm texture.

What is the difference between a turkey and a Bronze turkey?

Is a Bronze turkey better than a white turkey?

If the richer taste of the bronze turkey is calling your name, then you won’t be disappointed in the beautiful taste and texture. However, the difference in taste is more pronounced in brown meat, so if you’re only going to eat white meat, white turkey may be your best option.

What is the difference between a bronze and silver turkey?

Is a Bronze turkey a heritage breed?

Not to be mistaken for the Broad Breasted Bronze turkey, the Heritage (Standard) Bronze turkey has been around for most of American History. It originated by crossing Wild Eastern Turkey with the domesticated turkeys brought over by early European Colonists.