The broad-breasted white turkey is a breed of domestic turkey from the United States. This domesticated turkey is used commercially for its meat. The breed was developed by crossing the white Dutch turkey breed and the Bronze turkey. And it has become the dominant turkey breed on the market, plus this breed is the one most Americans know about.

Before the development of the breed, the Bronze turkey breed held the dominant position in the turkey market. But people began to prefer the broad-breasted white turkey in the early 1960s. Breeders began to prefer the breed because it produced a cleaner carcass, this general breed of white turkey was admitted to the Association’s Standard of Perfection. American Poultry Farming in 1874. 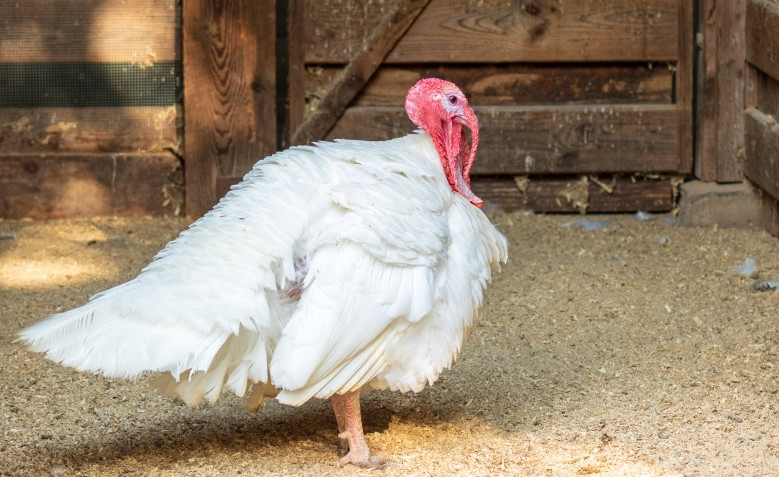 Broad-breasted white turkeys are large birds and have been bred to provide a fleshy fiber with more breast meat than any other breed of turkey. They are generally full white with pink legs, a black beard, and red skin. Small birds or chicks are generally yellow in color. The live average body weight of the mature broad-breasted white turkey ranges from 17 to 20 kilograms, but can sometimes weigh more.

It can easily outnumber a cat, lap dog, or any other bird in the pen (unless you have emus or ostriches on your farm, of course), these are definitely not small birds. Turkeys can often be very heavy.

The broad-breasted white turkey is the commercially most widely used breed of domesticated turkey. The modern domesticated turkey descends from one of the six subspecies of the wild turkey, Meleagris gallopavo gallopavo, the ancient Mesoamericans were the first to choose to domesticate this taxon.

The Aztecs domesticated the turkey (Mexican Spanish turkey, from Nahuatl huexolotl) and used it as the main source of protein (meat and eggs), and also used its feathers extensively for decorative purposes, as did many other Mesoamerican cultures. The turkey was associated with its god Tezcatlipoca, perhaps for its humorous demeanor. There is also evidence that the Hopi Indians may have domesticated the turkey even earlier than the Aztecs.

Turkeys were brought to Europe by the Spanish who had found them a favorite domestic animal among the Aztecs and other Mesoamerican peoples. After being introduced to Europe, many different breeds of turkeys developed (eg, Black Spanish, and Royal).

The domestic turkey was one of many species of bird breeds hunted by early American settlers and is believed to have been served on the first Thanksgiving, although there is little evidence to support this claim. At the beginning of the 20th century, many advances were made in turkey farming, resulting in varieties such as the small white turkey breed.

These turkeys can sometimes be a bit shy when it comes to their temperament. Generally speaking, broad-breasted white turkeys have fairly docile temperaments, with the occasional aggressive tome.

Since consumers who raise their own birds for meat often purchase sexed males, herds may experience some distress towards slaughter time as the males mature.

These are very strong and resistant birds, with a docile temperament, but some birds can become aggressive, highly dependent on selection by the breeder, today raised mainly for the production of meat, they are very good birds for the production of breast meat, Very productive and large birds, today very popular all over the world, cannot fly, and they are also short-lived birds.

These birds are raised in large, fully automated feedlots, which can house up to 10,000 birds. The typical traumas of the bird are heart disease, respiratory failure, and joint damage.

Most broad-breasted white turkeys are slaughtered on production farms as soon as they reach notable weight, between 14 and 18 weeks of age, except for small groups of breeding males that are raised for sperm used in artificial insemination.

How to Create a Habitat to Raise Turkeys

Since these are large birds, they will undoubtedly need a great deal of space. Inside a chicken coop, you will need to provide a minimum of ten square feet per adult bird so that you can make sure everyone has enough space.

When you provide the roosts, you should be careful to place them no more than 18 inches from the ground. Jumping from high places for large birds such as a turkey causes leg and claw problems after an extended period.

Young turkeys are very fast-growing and require more protein than most types of poultry. Feed your chicks a 30% protein starter until they are 8 weeks old. Once your turkeys reach 8 weeks of age, switch them to a high-quality flock breeder with 20% protein and high-calorie content. Your birds can remain in this hatchery until it is time for slaughter.

If your turkeys are kept in a fenced area, one acre is adequate for a dozen turkeys. You can safely raise adult white turkeys because you don’t have many predators to worry about. Your biggest concerns will probably be the big dogs.

Turkeys are generally short-lived birds, and they have a very high percentage of hatched eggs. Another challenge in raising this breed is the fact that they are generally unable to reproduce naturally.

If you are interested in raising broad-breasted white turkeys, there is a possibility that you will need to artificially inseminate. It is also difficult to keep the same breeding herd for a long time with this breed due to the problems they run into with age.

In the Philippines, broad-breasted white turkey is second only to bronze turkey in terms of popularity but is more expensive than the former due to its rarity.

If you’ve ever eaten a turkey from a grocery store, it was most likely a broad-breasted white turkey. Due to its rapid growth and heavy processing weight, it is an ideal breed for today’s meat industry. A survey conducted in 2012 showed that 87 million turkeys were consumed in the United States alone throughout the year. You can bet most of them were broad-breasted white turkeys.

However, these massive birds are not for every farm, some farmers choose to breed smaller, slower-growing heritage breeds, claiming they taste better. It is not in danger and is very well preserved due to human consumption.

How big does a Broad Breasted White Turkey get?

The growing process for these birds has been so well refined, the birds often grow to larger than 40 lbs. Average birds are typically 38-40 lbs.

What is the Broad Breasted White Turkey used for?

The Broad Breasted White Turkey is the most commonly used turkey for meat production. Used by large commercial growers as well as backyard growers. They are known for their fast growth rate and great feed conversion, they also have a cleaner appearance when dressed due to their all-white feathering.

Generally speaking, Broad Breasted White Turkeys have fairly docile temperaments, with the occasional aggressive tom. Since consumers raising their own meat often purchase sexed males, the flocks can get rather angsty towards butcher time as the males mature.

Since most turkeys are raised as meat birds, many people wonder, “Do turkeys lay eggs?” The short answer is yes.

How long does it take to grow a broad-breasted white turkey?

Broad-breasted toms grow to about 30 lbs. and hens 15 lbs., Broad-breasted birds are harvested at 14-18 weeks of age and produce an abundance of juicy, white breast meat.

How much room does a turkey need?