Blue chicken eggs are related to the Mapuche breed, also known as Araucana, but it is not the only species of hen, also Ameraucana and Collonca breeds produce the famous blue-colored eggs.

These eggs can be blue or greenish, they have a similar amount of nutrients as white eggs. However, as we will see later, blue eggs have a lower cholesterol level and more protein than the rest.

Why are there blue eggs?

The color of the egg can vary, having a hue that ranges from light blue to greenish-blue. But the varieties of its color do not occur by themselves, various agents cause this color change in the shell of the eggs.

The blue color of the peel is due to a pepper called biliverdin. That it is a product of the transformation of hemoglobin. This pigment is incorporated into the egg at the time the shell is formed, giving it a greenish-blue or light-blue hue.

The intensity of the color will also depend on the gestation time of the hen. In other words, the higher the posture, the less intense the color. For example: if the hen lays eggs every day, the color of these will not be as intense. Unlike if the hen lays every 2 or 3 days, the eggs produced will have a more intense blue color in their shell. 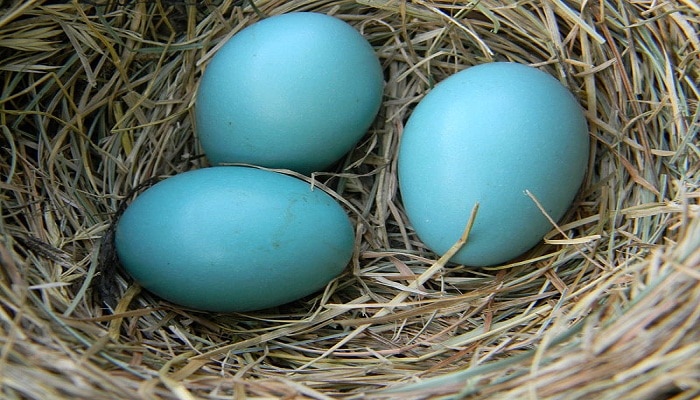 The differences between a white or red egg to a blue chicken egg are not so marked, except for their color. Among the characteristics of the most important blue eggs, the following can be mentioned:

In addition to these characteristics, there are also nutritional differences between blue chicken eggs and common white eggs, these are mentioned in the section on nutritional value.

These blue chicken eggs are used like any white or other colored egg. In the kitchen, they are used for various recipes, from salads to desserts, as it is mentioned that they are very rich in pastries, ideal for athletes due to their high content of proteins, vitamins, and minerals.

The nutritional advantages that the blue egg has with respect to the white eggs are minimal but they have great advantages, among the main ones are:

These are some of the nutritional benefits of eggs for all these characteristics it is thought that the blue eggs of the Araucanian hen are highly nutritious.

To emphasize the nutritional value of blue chicken eggs, the amount of nutrients that this food has is presented.

It also has vitamins A, D B1, and B2. And they are among the most delicious chicken eggs to prepare different meals, and with a large number of nutritional benefits for children who are in the development stages, or to maintain the health of young people and adults. They are a very important line of eggs for everyone.

Although it is thought that the Araucanian is the only breed that produces blue or green eggs, it is not entirely correct. There are other species of chickens that lay blue eggs. They are:

These 7 breeds can produce blue, light blue, or green eggs, however, the most popular is the Araucanian hen, because it is more commercial and ornamental.

The mixture of the other two subspecies (Ketro and Kolloncas) are the races that gave rise to the Araucanian hen. And these two breeds since ancient times produced blue eggs for the Mapuche settlers. Hence, the new breed of hen is called Mapuche or Araucana hen.