Asil and Shamo are two very similar chicken breeds that are hard to identify which is which. Both birds are developed for cock fighting and are still in high demand in the Philippines among Sabungeros.

Both Asil and Shamo have several sub-breeds making it more difficult to identify what the breed is, and if the breed is 100% pure or not.

Let’s examine what these chicken breeds are all about.

What is Asil (or Aseel) Chicken

Asil chicken (also spelled Aseel or Asli) is an ancient breed of chicken from India. Asil chickens are originally kept for cockfighting, but nowadays they are also kept for ornamental purposes. 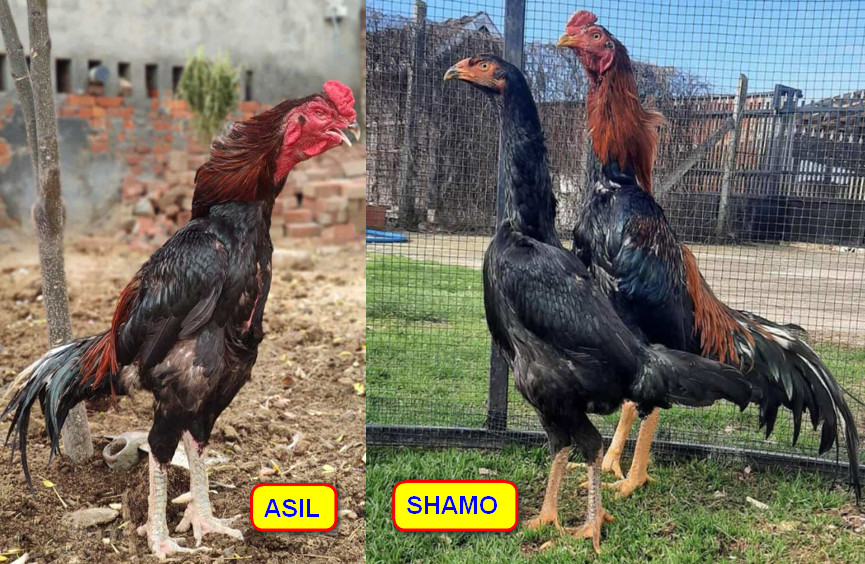 Asil chickens were brought to Europe around 1750. They are considered the strongest game bird in the world. They are very smart and strongly muscled and they contributed to the modern Cornish (broiler) breed. It is famous in the Indian states of Andhra Pradesh and Tamil Nadu and in Pakistan’s Punjab area. In general, this Fowl is found throughout Southeast Asia. The breed is generally unstandardized in South Asia and India, but its popularity has increased in the western world in recent times with the breed standardized in the British, Australian,  and American standards.

Asil chickens are very skilled in fighting. They have wide and very beautiful hearts. Their body structure is very good and they become very strong. The legs and neck of Asil chicken are very long compared to other common chicken breeds. Asil hens are not good layers. Hens lay a few eggs and their eggs are also small.

There are many varieties of Asil chickens available. Depending on the variety, the color of feathers can be black, red, or mixed. They have a small pea comb. Most of the Asil chicken varieties are big in size and very hardy. Diseases are pretty less. On average, an adult Asil rooster weighs about 3kg – 4kg, and an adult hen can weigh about 2.5kg – 3kg.

What is Shamo Chicken

The Shamo chicken is a hard-feathered Asiatic Game breed originating in Japan. Although the breed was developed in Japan, it’s ancestors came from Thailand (which was known as Siam) between the 17th and 19th centuries.

Shamo chicken was developed mainly for use as a fighting bird. And the breed was imported into many countries mainly for this reason. There are many different kinds of Japanese Game chickens, but currently, the Shamos is best known.

Actually, the Shamo chicken is a strain of the Asil chicken. Which was taken to Thailand and Taiwan and from there to Japan. The real origin place of Shamo is in Sindh, Pakistan. And the secondary origin place is India.

The name “Shamo” was a corruption of the word “Siam”, which means “Thailand”, during the early Edo period. Even though the breed was originally from Thailand, it has been selectively bred for several hundred years and is very different from the original stock. The breed is used in naked-heeled cockfighting in Japan, where it is still legal. It is also bred all over the world for its show quality and unique upright posture

Despite being a popular game chicken, the Shamo chicken is also known for being the second tallest breed after the Malay chicken. In appearance, the Shamos are large and tall chickens with upright, nearly vertical, body carriage.

They have well-muscled thighs, a wide and muscular bodies. They have hard and closely held feathers that often do not completely cover their bodies. They have heavily boned broad shoulders. They are taller and less compact than the Asil chickens and lack the exaggerated curves of the Malay chicken.

Their wattles are also of bright red color, which is very small or missing entirely. They have yellow-colored beaks and legs. And their eyes are of pearl color. The plumage color varies depending on the color variety.

So What’s the difference between Asil and Shamo?

As mentioned above, Asil and Shamo are almost the same with very little difference. To put it into perspective, it is very difficult to identify whether the chicken is Shamo or Asil unless you have both that you can compare side by side. But anyway, here’s a quick detail.

What to Buy, Asil or Shamo?

Depending on your preference, there is really no difference between Asil and Shamo when it comes to cockfighting performance as both are excellent fighters, taller than most gamefowls, and muscular and strong.

Questions related to Asil and Shamo

What are Shamo chickens good for?

As with many other Oriental fighting breeds, the Shamo chicken was developed to have strength for striking and endurance during sustained combat – qualities necessary in the naked-heel “boxing” form of fighting practiced in the Orient that is still legal in Japan today.

Is Shamo chicken good for meat?

Yes, shamo chickens are very good for meat production. They produce a good amount of meat and their meat is of excellent quality. How big is a shamo chicken? The shamos are large and tall chickens.

What is the difference between Asil and Shamo?

How big do Shamo chickens get?

The Shamo is a large, tall chicken, typically 30 inches tall, that carries itself in a nearly vertical position. They have muscled thighs and wide, muscular bodies. Their feathers are hard, and close to the skin, and they often don’t provide complete coverage of the skin, with no feathers on their face or throat.

Are Shamo and Asil the same?

What is the best Aseel breed?