The Abacot Ranger Duck is a light breed of domestic duck of English origin but selected in Germany during the 20th century, with the aim of obtaining a good duck that produces both eggs and meat. It is a slender and elegant breed, with the typical lightweight of all egg breeds and a unique wild silvery color. This type of duck is widespread and raised throughout Europe, and is present in almost all poultry events on the continent.

The breed was born around 1920 in England by the poultry farmer Oscar Gray, starting from the crossing of a Campbell female with a white Indian Runner male, initially, the color was not well defined, and the ducks obtained were mostly white. Gray’s goal was to obtain a duck capable of producing a considerable number of white eggs, like the Campbell and Corritrice Indiana ancestors, and at the same time a good weight for good meat production. 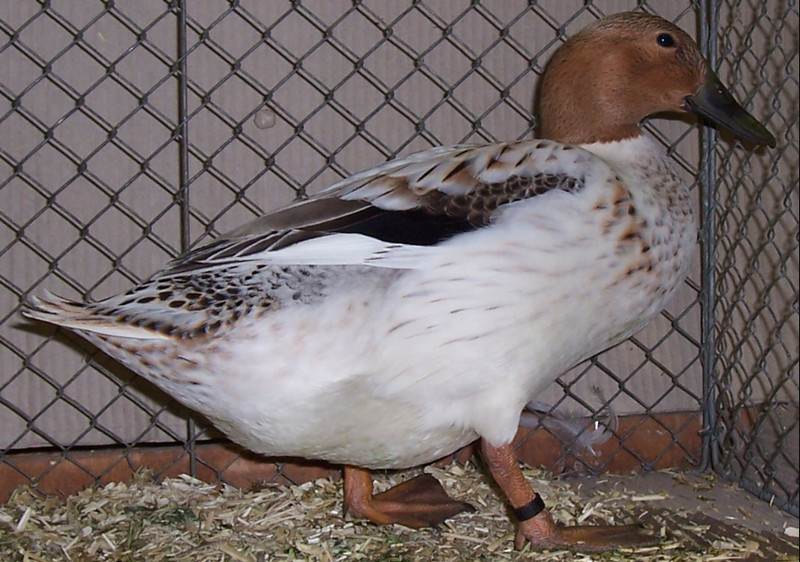 Thus was born the Duck Abacot Ranger, the original name of the breed that is still used in the UK: Abacot, from the town where Gray lived and had his own duck farm, in Friday Wood, near Colchester, and Ranger because he was a great “explorer”, a very rustic breed that loved to graze all day looking for insects and other food.

At first, the breeder had coined the name Hooded Ranger Duck, after the wave of those years in which several English breeds took names with military characteristics: “hooded” means “hooded”, and refers to the head of the race that has, in both sexes, a different color from the rest of the body. The term “ranger” also refers to particular military units.

However, after a few years, the breed disappeared from the Essex countryside, but in the meantime, it had already been exported to Germany, where it was made the subject of intense selection by breeders until it reached its present form. The honor of this operation falls above all to the German breeder Herr Leiker, who in 1926 had bought a group of stallions of the breed.

Initially, the breed was renamed by the German Liekers Streifere (Leiker’s Passwoman, in honor of the German breeder), then Streifere Enten, and finally Streicher, from the German Caress, which means vagrant or vagabond, thus maintaining the meaning of the original name in English Ranger. In the 1980s, a translation of the German Streicher standard was sent to the Poultry Club of Great Britain, so in 1987 it reverted to the British standard.

It is a duck with an elegant and distinguished posture, with a very proportionate physical structure. The trunk is cylindrical and compact and absolutely keel-free. The position is not horizontal, but slightly upright (as in all derived breeds), especially in the male. The chest is full without being too meaty or flat. The belly of this duck is well stretched and not very developed. The tail follows the line of the back and rises slightly.

The legs are set slightly back and are not fully visible, as they do not separate from the trunk. The tarsi are thin and of medium length, longer in the male. The wings close and tighten to the body, never crossing.

The neck is of medium length and slightly arched, not too fine, gradually swelling towards the base. The head is small, smooth, and with a flat forehead. The bill follows the line of the head and is long and smooth without a keel. The plumage is well adherent throughout the body and not too soft, the weight is 2.5 kilograms for the male and 2.0 kilograms for the female.

The duck is present in only one color, the breeders of this breed should know that the color and the general pattern change with advancing age, and that also this coloration, and others of a similar pattern, is subject to the color of molting in the male, immediately after the mating period. Therefore, the breeder will have to worry about incubating the eggs in time to be able to expose the birds in the appropriate period.

The Abacot Ranger Duck is a very live and active duck, an excellent grazer and “destroyer” of insects and invertebrates that infest the fields, so it is convenient for it to be raised in open spaces with ponds, where the bird can find more food and clean area. This duck is capable of laying more than 200 white eggs a year, and although it is a light breed, it is also excellent for producing table ducks. Thanks to its production capacity and beauty, the breed has attracted the interest of all European breeders, which is why it is very common in the largest bird fairs in Europe. The egg weighs about 65 grams.

Excess weight, in addition to altering the morphology, would cause the loss of good egg production for which the breed was selected. Presence of the eye strip in both sexes. The female has a brown bill, no streaks, a grayish wing mirror, a whitehead, or a color other than golden brown. In the male: the general color is too dark, which would prevent the silver base from standing out, the neck ring is too thin or open at the back, and the head different from black with green reflections.

In the Philippines, there are Abacot Ranger ducks but they are usually mixed with the common duck. You can find them being sold on Facebook Groups.