The Toggenburg goat breed was bred in Switzerland in the 18th century in the Togberg Valley, from where it got its name. This breed is raised in the canton of St. Gallen, this area is not rich in pasture because the goats in the stable are more than in the wild

The Toggenburg goat breed is hardy, in food it likes twigs from trees 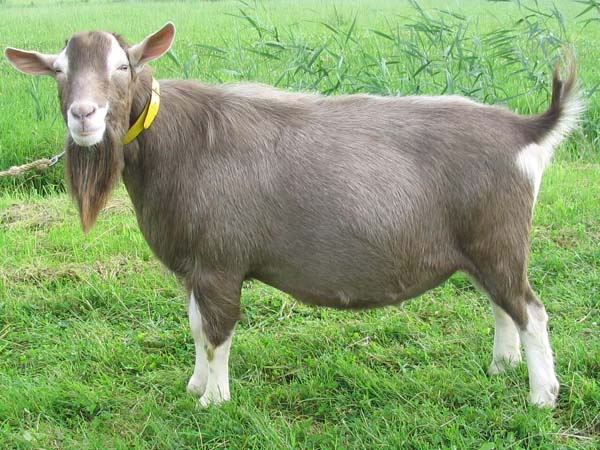 This goat has a very entertaining coloring, in general, the light brown hair tone and two dark streaks run along with the head with the forehead, the nose has a lighter color, and the faces of the ends and the inside of the ears are much darker. structure of wool in goats of medium length, silky, and very tight to the legs to the knees. Closes the trunk, back, and upper legs longer hair, a feeling that it is longer than it really is.

The growth of goats is from sixty-two to seventy-six centimeters. The weight of goats is 45 to 55 kilograms, and goats weigh from 60 to 70 kilograms. Goats are well built, they have a long head, a straight profile, slightly flattened. The neck is very long and elegant, the ribs are convex and the back is straight. The legs are not long. The ears of this breed are narrow and erect. Representatives of the breed are cloddy, and goats are found with horns

Toggenburg goats have a dry constitution, which is very typical for dairy goats. There is a developed udder, milk production is experiencing increases, and falls during the lactation period are four hundred to one thousand liters. In milk, on average, the fat is four percent. Goat’s milk makes excellent cheeses

The winner of the milk fat milk breed could give fat milk not less than forty-five kilograms per year. And the productivity record in America is two thousand six hundred and ten kilograms

Representatives of the breed are prolific, as a rule, two or three children are born

Toggenburg goats are high in dairy and only inferior in weight to the Saanen breed, but otherwise, an excellent breed and are often transported to other countries to improve the performance of their cattle.

In Germany, a noble goat from Toggenburg was bred, and in England, the British Toggenburg, for which the founder of the breed obtained all the Swiss acquaintances from Toggenburg.

The breed has spread to the territories of the European states, New Zealand, America, and Africa. On the territory of Russia, goats of this breed were brought before the First World War in the St. Petersburg region, as Prince Urusov did at the beginning of the 20th century. and since then no one has seriously dealt with the breed, and already in our time they appeared in the Altai

The coldness of Toggenburg goats is not terrible, they calmly tolerate it, even, perhaps, for them, it is preferable to warm up. Able to adapt quickly to a new climate, they can be kept on farms located in the mountains. The breed produces very high milk yields and in winter they do not fall.

But the breed has a serious drawback, its representatives are very demanding on the conditions of maintenance and nutrition, otherwise, the taste of milk deteriorates.

What are the characteristics of the Toggenburg goat?

Toggenburgs are compact, robust, dairy-type animals (that is, with a dished or straight facial line and wedge-shaped body). They are usually slightly smaller than the other Alpine breeds. The does weigh at least 55 kg. The average height, measured at the withers, is about 79 cm for dogs and 90 cm for bucks.

What is a togg goat?

The Toggenburgs are the oldest registered breed of any kind of livestock. They tend to be more spirited and less docile than other breeds. Toggs, as they are nicknamed, rank in the middle of breeds for average milk production, but one holds the all-time records!

What is the average weight of a Toggenburg goat?

Body weight for males is 70 kg and for females is 55 kg, and height is 75 cm for males and 70 cm for females. Because of their high milk yield, Toggenburgs have also been exported next to Saanen and Alpines. The milk production of recorded goats was 650 kg in 270 days.

Are Toggenburg goats good for milk?

Toggenburgs are known for their excellent udder development and high milk production and have an average fat test of 3.7 percent.

Why do farmers keep Toggenburg goats?

Their milk can be used to make all sorts of dairy products such as milk, butter, ice cream, and others.