The Russian White Dairy Goat breed is the most popular dairy goat breed in Russia and has been raised for hundreds of years.  Goats are the most beloved pets for most small-town residents, as they can be kept in a small shed only on forage or kitchen scraps. Wishing to acquire an animal as noble and not capricious as a goat, it should be understood that goats are different, some of them are dairy products, others are meat and a third are wool.

Naturally, when planning to buy goats for later rearing in order to obtain fatty and nutritious milk, it is better to buy goats from dairy breeds. It is to such breeds that Russian White Dairy goats are included, the origin of which remains unclear even today, as Gorky goats are commonly believed to come from Russian white goats. In addition, Saanen goats were used to improve the breed. 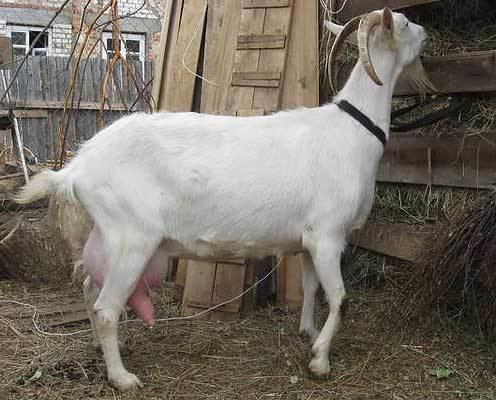 Female and male Russian White Dairy goats are small, quite normal, and have a strong constitution, and hair color – white. Weight of adult goats up to 50 kilograms, goat – 65, but some specimens of goats with good feeding Gorky can even reach 75 kg.

Russian White Dairy goats – milk for the lactation period, which lasts an average of 10 months, each female gives at least 500 kilograms of milk. Indicators of milk gave a few times queens amounting to 1,000 kilograms, with the fat content of 4-5%, but after six months from the date of calving, goat milk production may be slightly lower, since no be concerned, as this is quite normal for the Gorky breed.

Russian White Dairy goats are considered highly prolific, that twins are very often born and even triplets, statistics show that in the sheep population 100 units represent up to 210 children for each birth. There are confirmed cases that in a litter, that is, from a female more than 4 children were born, all of which were viable and absolutely healthy.

Russian White Dairy goat’s wool is short, has a heterogeneous nature, and undercoat practically does not have, because a billy goat for the year can be a very little amount of cutting wool, the average shear does not exceed 250 grams, indicating that these goats should not be raised for their fur.

Russian White Dairy goat care is very simple, as it is grown in Russia and it tolerates cold, heat, snow, and rain very poorly. Like most goats, Russian White Dairy has a poor tolerance for drafts and a lack of fresh air, which is immediately reflected in his wool. They feed the goat their forage, kitchen scraps, grass, herbs, and even tree leaves. Animals such as apples, cabbage, carrots, and squash can also eat potatoes, tops, and field weeds. Feeding should be carried out in such a way that the goats always have food and water since they do not eat much, but often.

During goat farming, it is important to remember that they do not like to graze in one place for a long time, even if there is a large amount of grass on the pasture, so it is necessary to divide the site so that it can be transferred from one part to another.

It is also important to monitor the hygiene of the animal since dirty white wool can cause parasites in it: insects and lice. Once every few months, animals should be treated with the help of parasites, not only internal but also external – helminths. With proper care and maintenance, Russian White Dairy goats will milk well, bring forth great offspring, and simply give a large amount of tasty and flavored meat, without requiring high-quality forages and special vitamins.