Native pig farming is something that you may never hear but actually one of the most profitable animal husbandry businesses. In today’s era, there are many new businesses trending. But there have always been really successful businesses related to animal husbandry and that includes farming. This includes raising chickens or poultry, of course, there is also raising native pigs or “baboy damo”

In this article, we will find out how to raise native pigs and why it is so popular.

Native pig, baboy damo, or wild boar in English is a type of pig that lives in forests. It is a kind of ferocious pig because of its lifestyle and because it is also not accustomed to humans.

Baboy damo is black in color and has longer fur compared to the typical white and fine-grained pig. 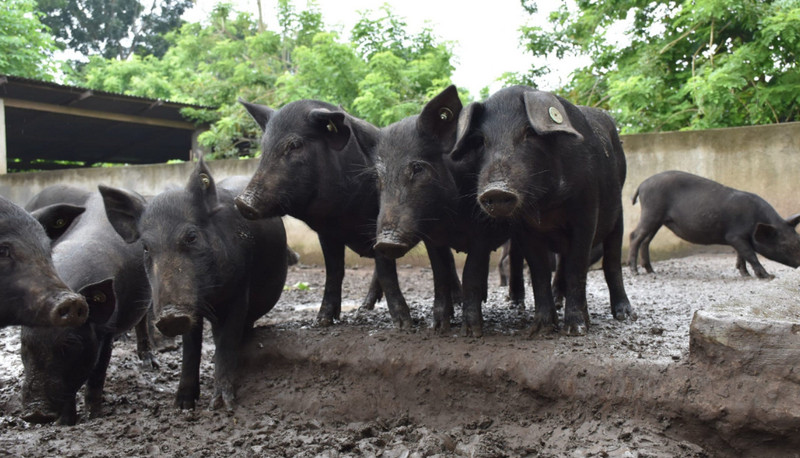 They also eat differently because they eat grass and leaves in the forest.

Mr. Rufino M. Legayo of Natividad, Pangasinan, has been involved in native pig farming since 1996.

According to him, it is difficult in the beginning to take care of wild boar because of its habit and it is not humanly accustomed to it.

His business started with catching female wild pigs in the Pangasinan forest and was followed by male pigs which will be used for breeding.

According to him, wild boars are really aggressive and need a closed cage, because if only the fence is waist-high it just jumps and escapes.

According to Mang Rufino, wild boars are not picky about food, in fact, every dry season or summer he releases them inside his farm and they themselves look for their food.

Some of their favorite foods are cogon root and whenever in the cage they can be fed with many leaves and grains like rice bran, vegetables, water spinach, and ipil-ipil leaves among other things.

The good thing about native pig farming is that it is not as dangerous to pests or other diseases as typical pigs. But what about selling it?

According to Mang Rufino, wild boar farming is popular as a business and he has proven it through two decades of care.

According to him, since the native pig is organic, its meat is healthier and safer compared to pork.

It is also easy to breed and he added, within a decade he has been able to sell countless of native pig pork.

His customers are new to eating native pigs and others make dishes in restaurants.

Did you know that you can sell a native pig that weighs only 20kg for 6,000 pesos?

In addition, it is easy to sell because its meat is safer, tastier, and tastier.

One of the main cooked wild boar recipes is the Lechon de Leche. The native pig farming business is really popular.

What do Native pigs eat?

Native pigs are easier and cheaper to raise because they are well-adapted to local conditions and do not require expensive housing and care. They are fed with organic materials available in the household or farm like food wastes, vegetable scraps, and plant leaves.

How much is native pigs in the Philippines?

Depending on the location, the price may vary. Raw meat can range from P250 to P350 and Lechon can cost up to P700 per kilo.

What is the Philippine Native pig?

What should you never feed pigs?

It’s ok to feed pigs uncontaminated fruits, vegetables, bread, grains, dairy, eggs, and vegetable oils. Do not feed pigs meat, fish, or their bones, oils, or juices, or ANY food that has touched these substances.

How many days does a native pig give birth?

How much does it cost to start a pig farm in the Philippines?

You may need a conservative amount of Php 40,000 to Php100,000 anywhere to start a pig farming business, depending on how you want to start. You can always start small and buy them one by one but you can go full blast and start everything right away.

What is the best feed for pigs in the Philippines?

What are the main characteristics of native pigs?

Native pigs were small with straight-to-low-set backs and short legs. They were predominantly black in color and had long snouts and small, erect ears. They were alert and nervous in temperament.