The large white pig is a breed of swine native to Yorkshire, England. The breed is widely used in modern and intensive pig farming due to its high fertility and good maternal characteristics, this pig is completely white, with erect ears. Currently, this breed of pig is very popular with most commercial breed pigs raised throughout the world.

The first Stud Book for the breed was published in 1884, although the breed’s earlier history in Yorkshire is difficult to trace. The development of modern performance testing programs led to an increase in global demand for large white pigs from the UK in the early 1970s. And more than 8,500 pedigree large white pigs were exported throughout the world. world in the first three years of that decade.

Large white pigs are the most widespread and raised breed of pig in Italy; Their breeding began in 1873 (the year of its importation) in northern Italian cities such as Reggio Emilia, Parma, and Mantua, also absorbing local breeds, to the point that for many years it was also called the “Reggiana” breed.

The color is uniformly clear, white, without spots, with white hairs on a white rind. It is a very active pig, despite the length of its body, in addition, the parallelepiped shape of the animal gives it a good balance. The large white pig is a fairly large pig, the males measure 105 centimeters at the withers and weigh 380 kilograms, and the females 100 centimeters for a weight of 320 kilograms. 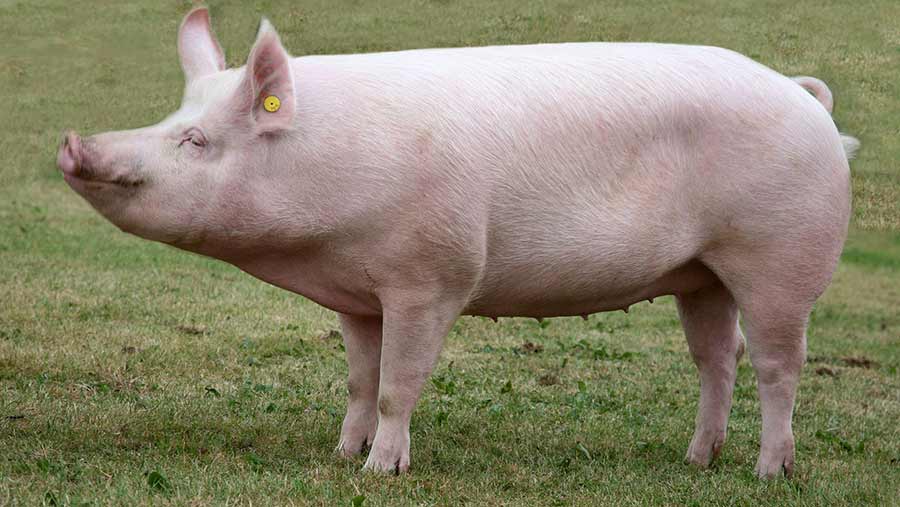 The large white has an elongated parallelepiped body, ears pricked open at the front, and strong legs. They have white fur and pink skin; the height at the withers is 0.9 to one meter; the average weight is between 300 to 350 kilograms with peaks or specimens that can reach 450 kilograms in males and 350 kilograms in females (for this reason it is also known as the great white breed of pig).

It has a slightly concave profile, the raised ears, the thighs and the shoulders are well developed, it has convex buttocks with thick hams, the back is long, broad, and muscular, and it also has a strong skeleton. It also has no less than 14 nipples.

The breed was recognized for the first time in 1868, the first herd book was founded in 1884. As early as the 19th century, pigs were frequently imported from England. As the name suggests, the breed is truly large in size and pure white in color. The large white pig breed was one of the original founding breeds of the National Association of Pig Breeders and the breed was first recognized in 1868.

The large white pig is a breed particularly appreciated by breeders because it combines very good maternal qualities with equally interesting fattening abilities without showing any noticeable defects. It is an early and prolific breed that produces an average of 24.9 piglets per sow per year. In addition, it has good growth behavior (a young neutered male reaches 100 kilograms in 145 days) and a consumption rate.

In fattening castrated males, the average daily gain is 944 grams per day and the consumption rate is 2,691. The large white pig produces very good quality meat, with a thin bacon thickness (9.9 millimeters of backfat). It is free of the halothane susceptibility gene.

In addition, it is a very resistant pig with strong legs, which can adapt to various rearing systems, both outdoors and in facilities. It copes well with hot countries, especially West Africa.

In France, the breed selection body is the collective book of pigs, which also manages the native French and foreign breeds. In 2005, there were almost 8,000 sows entered the herd book, of which about 7,000 actively participated in the selection.

In the 1980s, a program was established in the breed to create a hyper-prolific lineage that produced very good results beginning in the 1990s.

Like some of their European counterparts, French breeders, as well as some of their European counterparts, tend to reveal two varieties: a female variety selected for its prolific and maternal qualities, and a male variety whose enhancement focuses on muscular content and growth. However, the female line is still the most important in terms of numbers (5,700 sows in selection compared to 1,300).

It is a versatile breed, the great white pig is today a central part of French pig farming, where it was imported in the late 19th century. It represents 60% of the pig household in France and is also the majority in its country of origin. Due to its formidable characteristics, the large white breed of pig, or its derivatives such as Yorkshire in the United States and Canada, is widely dominant on pig farms around the world and very few crossbreeding patterns lack its exceptional qualities. The breed is not threatened.

Large white is also the most popular and widely farmed swine breed in the Philippines whether in big piggeries or backyard farming. The cost of a large white piglet (biik) ranges from P2,800 to P3,500 depending on the season and location.

What is the Large White pig used for?

The Large White is predominantly renowned for bacon production but there is flexibility within the breed to allow farmers to send pigs to slaughter at a range of weights. The breed is well-conformed with little fat and suited to meeting supermarket/processor requirements.

The Large White is a great pig for any buyer as it grows fast, produces good quality, lean meat, and is a good mother. These pigs with their distinctive pricked ears are friendly and full of character.

What is a white pig called?

Yorkshire. The most-recorded breed of swine in North America, Yorkshires are white with erect ears. They are found in almost every state, with the highest populations being in Illinois, Indiana, Iowa, Nebraska, and Ohio. Yorkshires are known for their muscle, with a high proportion of lean meat and low backfat.

What is the Large White pig in the Philippines?

These are the Landrace, Large White, Pietrain, Duroc, Hampshire, and the Philippine native pig. The Landrace breed is white or pink in color and has small, droopy ears. It is also tall in stature but slender as compared to the other breeds.

What is the advantage of Large White?

The Large white pig breed has many advantages: excellent prolificity, a great rate of growth, optimal Global FCR, and excellent meat quality… Large White Sow and its piglets also have high resistance and adaptability that make it a genetic type that can be exploited under many rearing conditions.