The Euskal Txerria Pig or Basque pig is a very rare breed of domestic pig that was developed in the Basque Country region of France and Spain. They are raised primarily for the production of pork, which is popular for its excellent quality and aroma. These pigs were almost on the brink of extinction until steps were taken to revitalize them.

The characteristics and stature of the animal are medium to large; the head is strong with a solid muzzle; the limbs are strong (which helps them to walk easily, unlike many other breeds), the coat is silky with large black spots; the rump and head are black, while the back is convex; the ears are fat and large hanging over the eyes.

The Euskal Txerria pig is a breed of pig native to the Basque Country. As its French name suggests, the breed is ragged, black, and pink. What today is called the Basque pig is one of several historical breeds or types of breeds that the Basque peoples preserve, and it was consolidated with the name only in the 1920s. Although they were relatively common in the early 20th century, Euskal Txerria pigs almost they had disappeared in 1981, and fewer than 100 breeding sows remained. 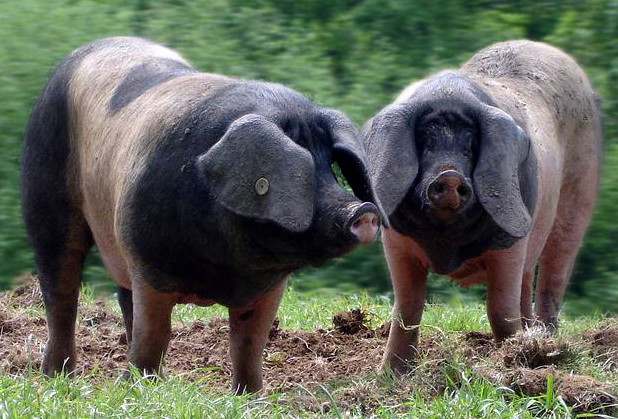 Euskal Txerria Pig grows slower and develops more fat than modern breeds such as the large white pig, making them less suitable for intensive commercial meat production, but ideal for creating cured pork products such as Bayonne ham. Basque sows have smaller litters of about nine offspring, but they have strong maternal instincts and are good mothers.

The standard for the breed of pig in the Basque Country was established in 1921. It is an Iberian pig, a runner, capable of foraging for food in the forests and in the fields. It is short at the limbs with a compact body and is distinguished by its characteristic black-and-white color (the head and rear are black, and the rest of the body is white). He has black ears falling over his eyes.

The black pig of the Basque country certainly has a high degree of kinship with the Limousin pig. The boar pig and both the adult sows weigh from 140 to 160 kilograms.

The Euskal Txerria pig is the first pig to be mentioned in the herd book even before the popular large white pigs, which entered the book in 1928. Originally, the Basque pig comes from the Bearn and Hautes Pyrénées regions of the Basque Country, located in the southwest of France, it is also known that this breed was very common at the beginning of the 20th century.

The Euskal Txerria pig is one of the six officially recognized local breeds in the country (the other five are the Bayeux, the Western White, the Gascona, the Limousin, and the Corse). In 1981, with fewer than 100 breeding sows remaining, the country’s Ministry of Agriculture officially declared it an endangered species. The breed almost went extinct until a handful of local breeders took quick initiatives to prevent its extinction.

The breed was consolidated under the name only in the 1920s. Today, the breed is maintained and preserved by small farmers in Spain and France who dedicate themselves a dedication to maintaining the tradition of Basque foods known as boudin, chewing gum, the pure, the cured double chin, as well as bacon.

Its good resistance to inclement weather and its low food requirements (grass, chestnuts, acorns, peas, peas, fruits, etc.) make the Basque pig an animal very well adapted to mountain livestock. In semi-freedom, he travels through the mountains for more than a year before reaching the butcher’s stalls.

Early enough for a local breed, it is slaughtered between ten and eighteen months of age. Its firm and tasty meat have made Bayonne hams and other sausages from southwestern France famous.

Euskal Txerria Pig roams freely on the mountainside and forest areas during outdoor farming, taking shelter at night in wooden huts with fern roofs. They are not suitable for confinement.

Euskal Txerria Pig is a breed of pigs, originally from the Basque lands. As mentioned by its name in French, this breed is a bicolor pig, which includes the color black and pink.

In the first two months of life, a piglet weighs about 20 kilograms, while the live weight of a mature adult ranges from 140 to 160 kilograms. In ham, although the surface of the fat and cured lard is firm, it is oily, and it melts in your mouth. Lean meat is elastic, soft, and tender. The litter size of Basque sows is about 9. They are good mothers and have strong maternal instincts.

These pigs grow relatively slower than most other breeds of pigs. However, they are more fattening than modern breeds of pig, such as the popular white pig. This makes Basque pigs less suitable for intensive commercial pork products, but they are ideal for making cured pork products such as Bayonne ham.

The meat of the Basque pigs is dark red, tasty, and tender. Due to the natural staple diet, the genetic characteristics of the breed and the traditional free-range breeding, the quality of the meat is excellent. The fresh herb included in your daily diet causes the adipose tissue to store more antioxidants and fatty acids, which makes it excellent for healing.

During the 20th century, due to the growing scarcity of oak trees, and victims of deforestation, the number of specimens decreased considerably until the breed almost disappeared. Since the 1980s it has undergone a new development with the support of the local breed conservation program, led by Claude Texier and Michel Luquet at the IFIP-Pig Institute, which allows the breed to rebuild itself from the Bagnères black pig. Currently, there are about 430 sows on 70 farms.

In 1989, a score of producers from the Aldudes Valley, in Lower Navarra (French Basque Country), gathered around Pierre Oteiza (producer and meat curator) to found the “Basque Pigs Association”, whose objective was to increase the number of pigs in the Basque Country. At that time, this number were only 25 pigs in the region, they managed to increase it to more than a thousand by the year 2000.

This is a breed known as “in conservation” and in danger of extinction. Today, the breed is preserved by small farmers in France and Spain who specialize in traditional Euskal Txerria pig foods.

Euskal Txerria pigs grow slower and fatter than modern breeds such as large white pigs, making them less suitable for intensive commercial meat production, but ideal for creating canned pork products such as Bayonne ham. The Basque sow has small pigs, each one can have up to nine, but has strong maternal instincts and plays a role as a good mother.