The Dutch Landrace Goat is one of the original breeds found in the Netherlands, it is related to other goat breeds called “Landrace” from northwestern Europe. There is a herd of approximately 1,000 individuals that is used in national reserves to keep natural areas open and free from trees.

The Dutch Landrace Goat is a breed of goat with long and strong hair that is very resistant to colder climates, which is why it was very common in northern European countries. This kind of goat is an endangered animal, and from 1900 the goat was crossed with imported breeds, with the aim of increasing milk production. After World War II, the Dutch Landrace Goat was almost extinct.

This breed of goat is primarily a milking breed but can be used for meat or fiber production. Because there is so little left in the breed, it is not used commercially. It is a medium-sized goat with long hair that can appear in different shades of brown. The breed is characterized by its short limbs and grows to a maximum of 65 centimeters, with females up to 60 pounds and males up to 80 pounds.

The Dutch goat is a medium-sized, robust animal with relatively short legs. The minimum size for goats is 65 centimeters and for turkeys 75 centimeters. All colors are possible in this goat specimen. 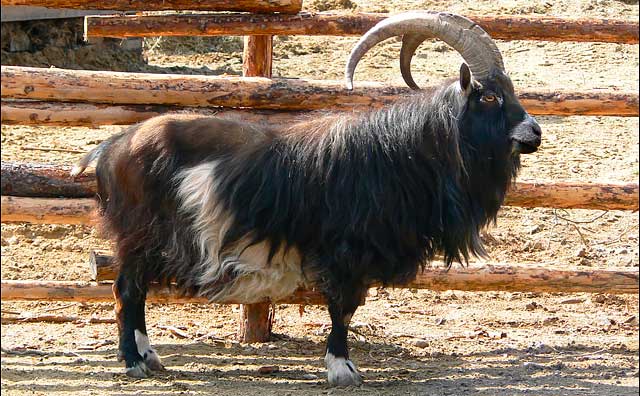 These goats are noted for their huge horns, which first bend backward and then to the sides in a fan shape, with the tips slightly upwards. Goats usually have a wig with a goatee, which is especially suited to young animals, a goatee, and a very hairy right hand, while the body hair is down and quite long.

Female goats also have horns, but they are less visible than male goats. The horns are bent back. They have a fairly short head with a somewhat curved profile and a goatee. Their hair is shorter than that of the common goat but generally long and coarse.

In 1958 the last two specimens from the Goois Nature Reserve were donated to the Blijdorp Zoo. The then director, Dr. A.C. van Bemmel, began to breed with these and other country goats, which still had enough of the type. In 1971, four male goats and four female goats went to the National Institute for Nature Management in Leersum, where they were used for breeding. This pair grew in size and could be selected based on the original type, derived from old images in paintings. In 2000 there were more than a thousand mountain goats in the Netherlands. The goat is on the list of rare pet breeds.

The Dutch Landrace Goat was going extinct in the middle of the 20th century and had only a few left in the world as of 1958. A breeding program was designed to save the breed and has since built the breed until the year 2000 which are registered in the herd book of the LFNL (National Association of Dutch Red Goat Breeders).

Dutch Landraces Goats are raised primarily as hobby animals and are sometimes milked. They are also used for grazing in nature reserves.