The Boer goat breed of goats only appeared recently but managed to find a loyal following for a short time, and this is true because they are beautiful animals, well, what will we talk about, you will certainly agree with this. It become one of the most popular goat breeds for meat production.

Boer goats, as a breed appeared in southern Africa at the dawn of the 20th century. After that, it was possible to mix the best of goats of local breeds and representatives of Europe and India. The goat’s name is derived from the Dutch word, which means farmer. This is the most famous breed of goat in the world that is grown to produce excellent meat 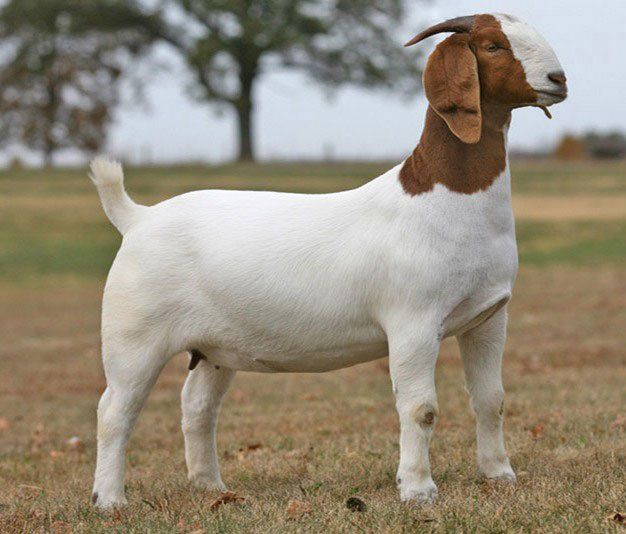 The goats of this breed in color are white with a brown head in rare cases, you can find markings on the slender legs, a beautiful body, and a flickering tail. More rarely you can see animals with a black wool color, such as the night and the fawn. His wool is short without shine

According to the structure of the body, they are usually medium or massive. The head is large, with an exceptional forehead and a curved profile. A very remarkable decoration is that the horns are heavy, not short, and directed in opposite directions. The ears are on the sides rather large hanging. The thick neck is located on the powerful shoulders, the thorax of these animals is massive, deep, and developed, and the back is straight, long, and wide. The udder for feeding children has four nipples, not two. Strong legs, well-shaped hooves

Goats weigh eighty kilograms, and goats are ninety kilograms. Goats of this breed are prolific for two years there are 3 goats. The goat has only one goat for the first time, and then only two. Only newborn babies weigh four kilograms, every day they add at least four hundred and fifty grams. The slaughter yield is fifty-four kilograms. Goat milk is given, just a little is enough to feed children about two kilograms. The meat of these goats is tender with the taste and smell of a young calf, not fatty, and suitable for cooking dietary dishes. You can use wool, and goat skins to make various crafts

Boer goats were especially popular in Africa, America, and New Zealand. In the territory of America, goats are raised in the state of Texas

In feeding, Boer goats are not capricious, they are short-lived pastures that are not suitable for livestock. Normally they feel at a high temperature in the environment, very sensitive and affectionate mothers. They have excellent immunity to diseases. They have a friendly, non-confrontational, and peaceful character

Due to its natural tranquility, this breed can be grazed with representatives of cattle, sheep, and horses, but for grazing, it is more useful if sheep and goats graze nearby, because pastures are used to maximum effect.

There is crossbreeding, most of the time the Nubian breed is used for this purpose, but many breeders are fans of purebred goats.

But it has a disadvantage, which is quite serious. Boer goats love to pick from hedges and small trees where you live is at least a goat chance of the appearance of new shrubs reduced to zero

Boer goats often put on decorative exhibitions. Very few owners can keep herds of goats that do not generate income, and a couple of copies for the rest of the soul does not hurt anyone. Also, if it comes to Boer goats they are calm, gentle, and loving.

In the Philippines, the Boer goat is very popular and there is even a farm called Boer Goat Farm in Batangas that sells Boer goats and offers investment opportunities for goat farmers.

What is so special about Boer goats?

They are prized for their size, rapid weight gain, carcass quality, hardiness, and docility. These qualities can be passed on even when Boer bucks are bred to does of other breeds. Boer does are renowned for kidding as often as two times in three years, frequently bearing twins and sometimes triplets.

What are the disadvantages of Boer goats?

How big can a Boer goat get?

The meat of Boer goats is of the best quality. This is the reason for their growing popularity among goat meat producers around the world. They can be expensive, but for everything they are capable of providing, they are worth it. Boer goat is recognized by its large, muscular white body, redhead, and blaze.

How long will a Boer goat live?

How long does it take Boer goat to grow to full size?

What age do you butcher Boer goats?

How many months is a Boer goat pregnant?

How much water does a Boer goat need per day?

Boer goat farming is economically viable, she says, but a farmer needs at least 100 ewes to provide the necessary economy of scale. In addition, the focus in a commercial operation must be on delivering “maximum meat at minimum weight”. This means that it is best to market goats as soon as possible after weaning.

Yes! Boers have very creamy, rich milk. Many farmers are moving toward using Boer goats for companion animals or pets.