Berkshire pigs are intelligent animals and are well suited for the extensive pig farming system. They are well known for their quality meat production. Berkshire pork is prized for its juiciness, flavor, and tenderness, it is pink in color and heavily marbled. The meat is rich in a high-fat content, which makes it very suitable for long, high-temperature cooking.

Berkshires is an early maturing breed of pig. They were bred in the mid-19th century in Berkshire County by crossing large, late-maturing local pigs with male Neapolitan, partly Siamese, and Chinese breeds. They have a broad and uniform back. The ham reaches the joint of the short and strong legs. 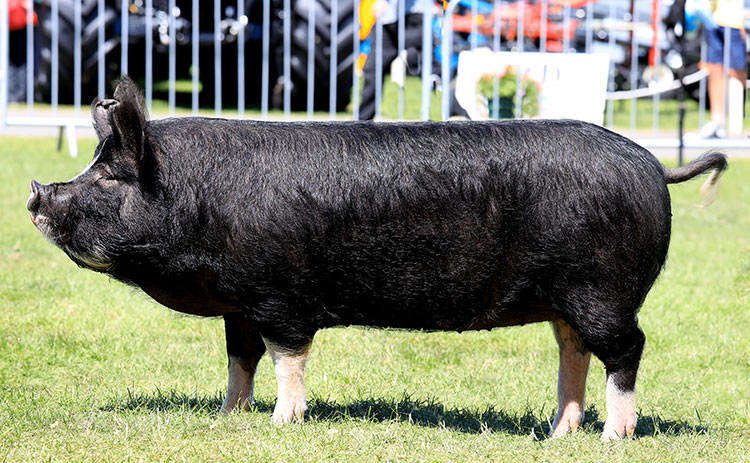 These Berkshire pigs are medium to large breeds, with a mean weight at maturity of about 270 kilograms (about 600 pounds). They are a short-legged pig breed, which also has pricked ears and a relatively short snout with the nose up. They are a rare breed of pig native to the English county of Berkshire that is raised in various parts of the world, including England, Japan, the United States, Australia, and New Zealand.

The Japanese designation of the breed, Kurobuta (another name by which it is also known), has become something like Kobe beef, a preferred brand of premium meat, which has increased the popularity of the breed in the 21st century and has made pork products from this historic breed more expensive.

It is a medium breed, they are black, except for the tips of the legs, the tail, and a spot on the head. However, sometimes the front legs are completely white with the shoulders and back area also white.

The head is massive with a short snubbed muzzle. The ears are raised forward, sometimes slightly curved. The body is long with a muscular back, the legs are short.

Berkshire pigs are considered the oldest breed in Britain. Like the other types of pigs, it belongs to the pig family. They originally came from around the towns of Faringdon and Wantage, which at that time still belonged to the county of Berkshire (now Oxfordshire).

They obviously became popular after being “discovered” by Oliver Cromwell’s troops while stationed at Reading during the English Civil War. Today it is one of the most threatened domestic animal breeds.

The Japanese breeding line of the Berkshire pig is known as Kurobuta (Black Pig). Berkshire pigs were originally brought to Japan in the 18th century as a gift from British diplomats. Marbled meat is highly prized analogous to Japanese beef. In Hungary, the Berkshire pig belongs to the so-called salami pigs, which are specially bred in the Szeged area for the production of winter salami.

Berkshires pigs are known for their excellent disposition and their curious and friendly nature. They are robust pigs that are well suited for outdoor and work environments. Their dark color prevents sunburn and makes them suitable for outdoor breeding. It is a calm breed and the females have good maternal qualities: fertility, good milk production (high survival rate and good growth rate), as well as good longevity.

It is a breed suitable for the production of quality meat, but not suitable for industrial production. It has a good length of the loin that gives it quality bacon. The hams are round. The meat is marbled, tender, and loses little weight during cooking. The meat is relatively darker and corresponds to the demand of American consumers.

Berkshire pigs are believed to have originated from Reading, the county town of Berkshire. It is one of the oldest breeds of pigs in England. It was the first breed to record pedigrees in the herd books. Herds of the breed are still kept in England by the Rare Breeds Survival Trust in Aldenham Country Park, Hertfordshire, and by the South of England Rare Breeds Center in Kent.

The Berkshire pig was classified as vulnerable in 2008; As of that year, fewer than 300 breeding sows were known to exist at the time, but with the breed’s renewed popularity through its connection to the Japanese marketing of a “wagyu for pig” connection, the numbers have risen.

The pig is also raised in Kagoshima prefecture, Japan, under the trademark Kagoshima Kurobuta (“Kagoshima black pig”). The Berkshire pig was introduced to Kagoshima through the Ryukyu Islands. Since the Meiji period in Japan, pig farming has expanded and proliferated to become one of the major agricultural industries in the prefecture. Since the late 1800s, Japanese farmers and breeders have worked to improve the quality of their Berkshire herds.

Japanese Berkshire pigs are bred to enhance the flavor characteristics of the meat. Also, some pigs of the breed are bred in New Zealand and Australia, but now there are less than a hundred purebred sows.

In the United States, the American Berkshire Association, established in 1875, gives pedigrees only to pigs imported directly from established English herds or to those directly traced back to such imported animals. The association was the first pig registry to be established and the first registered pig was “Ace of Spades”, a specimen bred by Queen Victoria.

Some farmers prefer to import and raise Japanese pigs and maintain their care and diet in such a way as to allow them to be certified in Japan as American Kurobuta.

The Berkshire pig is a relatively fast-growing pig, taking 180 to 195 days from hatch to reach the commercial weight of about 113 kilograms. The sow of this class is very fertile and can have 8 to 9 piglets.

The Berkshire pig is a very rare type of pig, and in 2008 there were less than 300 breeding females left in the world. The breed is listed as “vulnerable” and is officially classified as a “rare breed”.