Goats are animals that, with proper care, will allow you to get nutritious and healthy goat milk for a person. And from its realization, your family can receive a solid and very solid benefit.

The American Lamancha goat was created in the United States of America in Oregon, its creator is Yu F. Frei in 1930, and it was registered in 1950. In an effort to bring this breed, he connected Spanish and Swiss goats. This breed is small in size. The growth of goats of this breed is seventy centimeters, and the goats are five centimeters larger. The weight of goats is fifty-two kilograms, and goats weigh at least sixty-four kilograms. 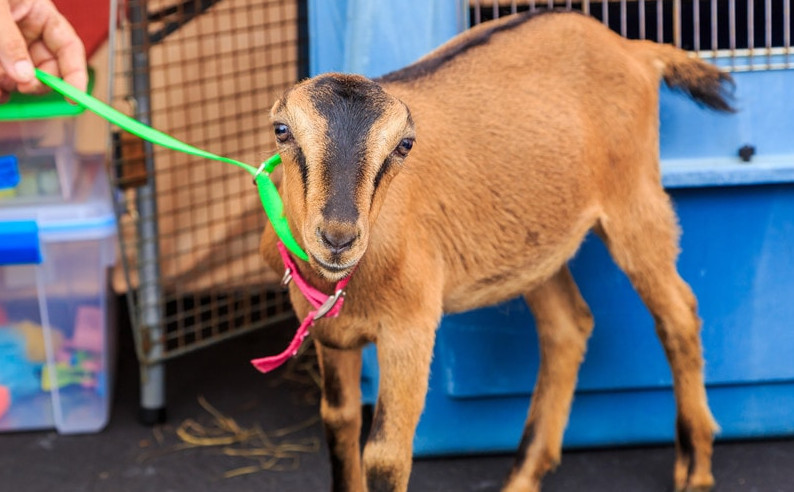 The nature of these animals is calm, kind, and gentle, not confrontational. Breed distributed in the United States

The breed has a very remarkable appearance, an inheritance from the ancestors of the Spanish La Mancha has a different shade of wool. The color of the coat can be black, or brown, with spots and without them. The coating structure is shiny, and not long

The muzzle of the goats, the straight and Roman nose, which had Nubian goats, also passed to the La Mancha breed and is seen as a drawback of this breed

The ears are very small and are very short “corrugated” and in the complete absence of cartilage, they are approximately two centimeters, as well as “dwarfs”, which have small cartilages of about five centimeters. In connection with the fact that the ears of the goat are not really big nor the tag with the number, they cannot be put on, nor is it possible to make a tattoo to draw numbers, so everything is done on the tail of the animal

The breed of goats from La Mancha in which the length of the ears exceeds the thoroughbred described above is not recognized.

The meat-and-milk breed of this breed has high milk yields, and its fat content is four percent. Regarding palatability, La Mancha goat milk is very pleasant, it does not have a specific milk smell, which is present in other breeds

Goat milk is useful even for people who do not tolerate milk proteins and gradually replaces cow’s milk. Cows consume fifty types of herbs in their diet, and goats are five hundred, so the milk of these animals is very well absorbed and recommended for many diseases

Otherwise, the goats of this breed, ordinary animals, do not differ in content from their own species. If you decide to get high milk yields from your goat, then it will need to be fed, cared for, and cared for properly. The animal must receive food that allows it to maintain normal body weight. It is necessary to remember that a larger animal needs abundant nutrition compared to a small one. There is a great need for nutrients in the youth and adolescent group, even more than what is required for an adult goat. A pregnant goat needs additional substances much more than a brood goat. A dairy goat requires much more nutrients than a dead horse, and a large milk yield more than a small one

And finally, dealing with these cute animals in addition to the economic benefits that have already been said, a person even with a shattered nervous system will find peace and be able to make a full recovery.

Why don’t LaMancha goats have ears?

In LaManchas, the pinna-reducing gene is dominant: goats with two such genes have very little visible ear (gopher-type), while those with just one such gene have slightly longer residual pinnae (elf-type). The dominant gene ensures that the trait is passed on to most offspring.

What is the purpose of the LaMancha goat?

The LaMancha is a dependable dairy goat, producing quality milk with high butterfat and protein over a long period of time. One of the advantages to the American LaMancha breed is they can be milked for two years without being freshened.

What is a unique characteristic of LaMancha goats?

American Lamancha goats are perhaps the most distinctive goat breed; easily recognizable by their very short ear pinnae. They are also known for their high milk production, comparatively high butterfat content in their milk, and their people-loving temperament.

How much milk does a LaMancha goat produce?

How Much Milk Do LaMancha Goats Produce? A LaMancha doe can produce about 3 liters of milk daily, which is equivalent to . 79 of a gallon, over a 10-month lactation period.

How long does a LaMancha goat live?

LaMancha goats are usually kept as a dairy breed. They have a shorter life expectancy of seven to 10 years. Myotonic goats or fainting goats as they are commonly called, appear fragile but are actually a long-lived, hardy breed. Myotonic goats can live 15 years.

LaMancha goats are easy-going and friendly, they are the only American-made breed of goats and they are a great choice for farming or even just as pets.

How much are LaMancha goats worth?

As with any other breed, the price of a LaMancha depends on factors such as availability, the quality of parentage, and the breeder. A quality American LaMancha buck can cost anywhere between $400 and $600.