The Alpine goat is a goat breed native to the Alps and is one of the most popular goat breeds in the world. It is medium in size and characterized by a suede coat, in addition, this breed is known for being an excellent carrier of milk that establishes itself very well for breeding. Artificial insemination plays a decisive role in this type of goat, this is the first French goat breed in number, with 140,000 goats in the milk register.

The Alpine goat is a medium to large breed of domestic goat known for its very good milking ability. They do not have fixed colors or markings (although some brands are discriminatory). They have horns, a straight profile, and erect ears.

This breed originated in the French Alps, mature specimens weigh around 61 kilograms (about 135 pounds) and are around 76 centimeters (30 inches) tall at the shoulder. Alpine goats can be white or gray, brown or black. Alpine goats are heavy milkers. Milk can be turned into butter, cheese, soap, ice cream, or any other dairy product normally made from cow’s milk. They are often used for commercial dairy production, as well as for the production of farm dairy goats. 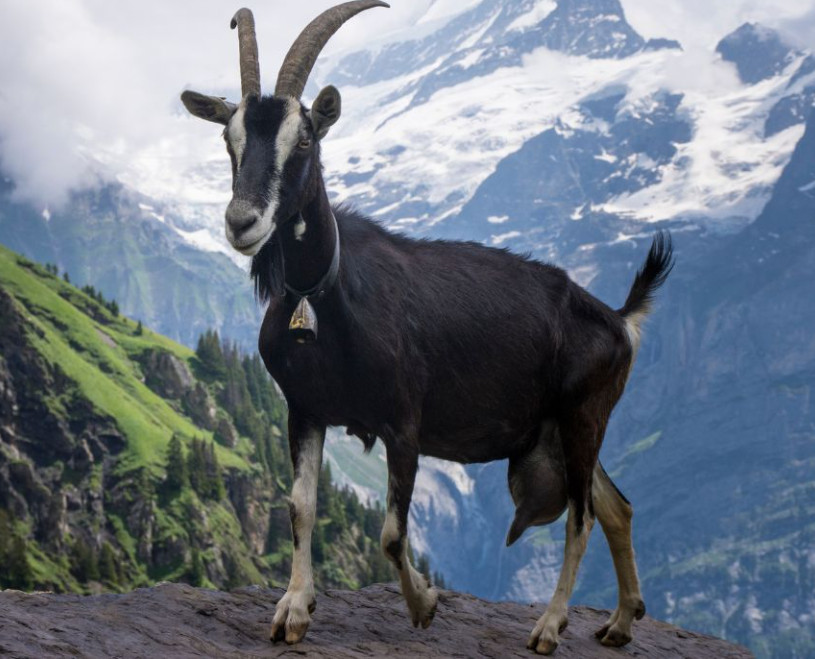 André Sanson cites the so-called “Alpine chamois” goat as a variety of what he called the “European goat breed”, a name adopted by Diffloth in 1911. According to Samson, the cradle of this European breed is the Alpine massif where the species has valued its ability to use steep pastures, inaccessible to sheep. Diffloth, in 1911, cites Switzerland as a country where goat farming is “practiced with care” and where it is the subject of a “selection directed at conformation and dairy aptitudes.”

Switzerland seems to be, therefore, a breeding ground for different varieties: the Blanche de Gessenay or Saanen and the Chamoisée des Alpes, mainly, whose dairy skills are the most developed, as well as the Toggenburg Goat, to which the Goat is added. black-necked Valais, described by Diffloth as a “high mountain goat, notable for its robustness”.

Starting in 1910 and 1920, the dairy qualities of the Alpine goat were observed by farmers throughout France, who began to integrate them into their herds. The breed was made official in 1930 with the creation of its herd book under the breed name Alpine chamois. Its expansion accelerated after the Second World War and it gradually conquered the central-western part of France, with selection efforts that allowed it to regularly increase its level of production. With 55% of the goat population, it is the most widespread goat breed in France.

The coat of this kind of goat exists under different color patterns: the suede coat is the most common because it is particularly fixed in the herds of the selection base, it is relatively homogeneous, fawn with black tips and dorsal lines. But within the population as a whole, the coat patterns can be very varied, pure white or mealy with a more or less extensive variegation and pigmentation in brown, fawn, gray, black, or red.

The size is medium, the female weighs between 50 and 80 kilograms and the male between 80 and 100 kilograms. Its proportions are those of a dairy animal: very thin, with dry limbs, a high chest, and a wide and slightly sloping pelvis. The udders are voluminous and well attached. The teats are suitable for both manual and mechanical milking. They are facing forward and are substantially parallel.

The alpine goat has excellent dairy skills. It produces an average of 780 liters of milk per lactation, but the best ones usually exceed 1000 liters per lactation. It also has good levels, with a protein level of 32.4 g / kg and a butter level of 37.3 g / kg. It withstands the temperature differences of mountain pastures and its hard hulls allow it to adapt both to the concrete floors of intensive livestock farming and to the pebbles of mountain paths.

The Alpine Goat has established itself in intensive goat milk production systems. They spend most of their time feeding a ration in which concentrated foods play an important role. It adapts very well to this type of driving and improves this portion with very high milk production. In its region of origin, however, it continues to be farmed more extensively, valuing pasture lands in summer pastures for its meat.

Known for its milk, the Alpine goat is famous for its rich dairy products, its milk is very popular in the dairy industry for its docile temperament, high-quality milk production, and long lactation. Alpine milk has a relatively low-fat content, with an average fat percentage of 3.4%. It is higher in sugar than cow’s milk, but it balances itself in the amount of protein.

Alpine goat’s milk has 2.3 grams of protein per 250 ml, while cow’s milk has 3.4. A higher protein count is not always good, as it contains more calories with higher fat content. Compared to Saanen goat milk, it is higher in all nutritional aspects except fat content, making it a much healthier option.

Alpine goats are one of the main milk producers, along with Saanen and Toggenburg goats. They are distinguished from the other two by their low-fat content value, which could be a direct correlation between the weight of the animal and its usual environment. However, the weight of the Nubian goat is similar to that of the Alpine goat at maturity, but it produces less milk, which contains a higher proportion of fat, than that of the Alpine goat.

The periods of greatest milk production occur after four to six weeks of delivery. The optimal weight at which a goat produces optimal milk production is at least 130 pounds. For the alpine goat, that number is greater than 135 pounds and it produces 2,134 pounds of milk per lactation. Good nutrition, proper milking procedures, reproductive management, and disease control are also factors that contribute to the milk production of the Alpine goat.

There are four requirements that must be efficient for optimal dairy production. Dairy goats must be housed in specific conditions so that their milk production is not alarmed by changes. Changes in external factors can cause a decrease in milk production due to pressure on the goat to adapt to these changes. The four factors for optimal production are adequate ventilation, dry beds, uncontaminated feeder and water supply, minimal labor, and disturbance.

Goat milk, like all goat milk, should be filtered and refrigerated immediately after removal from the lactating herd when intended for human consumption. The temperature at which the milk will stay best is 4.4 ° C. The milk needs to be cooled immediately so that no overgrowth of bacteria occurs. The hot bacteria grow at a faster rate and multiply so that the milk spoils. Milk that is refrigerated has a shelf life of approximately three to four weeks. Freezing milk increases its shelf life by about four to five weeks.

The Alpine breed has been very successful thanks to its high production and is widespread throughout France. Thus, there are significant numbers of ibex in the Loire Valley and its tributaries, in the Saone and Rhône rivers, and in Poitou-Charentes. In Savoie, the cradle of the breed, a large herd is still present. It is the first French breed in number, and 55% of the females registered in the milk register are alpine.

Caprigene France manages the breed selection system, together with the Saanen breed, another very widespread breed in the country. This joint breeding program brings together 1,000 farmers and 140,000 goats registered for milk registration. Its objective is to continue improving milk production, both in volume and quality, through the levels and content of alpha casein s1, which plays a fundamental role in the transformation of milk into cheese and, therefore, influences its performance.

Ease of milking and flow rate are also sought after. Selection is also intended to maintain the reproductive qualities of these breeds, namely their fertility, prolificacy, hardiness, and early maturity. The morphology of the animals is also taken into account.

Based on the performance recorded in the animals, but also in their parents, the indices are calculated by INRA according to the BLUP method. These indices will allow breeders to choose their breeding animals in the best possible way. To achieve a higher level of precision for goats to be used on a large scale, the performance of their young is also recorded. Thus, every year 100 specimens, chosen according to the performance of their parents, are subjected to the test on the offspring.