Ginger Farming in the Philippines is one of the most profitable agri-business ventures if the farm is properly managed and the ginger is harvested at the right time and price.

As of this writing, the current market price of ginger here in Tanauan City Public Market, Batangas, is P167/kg. There were a number of times that the prices reached up to P210/kg. Ginger farmers here in Batangas are making huge amounts of money. After all, ginger is one of the most important ingredients in Filipino dishes so whether it is P100 or P200 per kilogram, people would still buy it.

Ginger (Zingiber officinale Roscoe) is popular to its distinct sharp and hot flavor due to an oily substance called gingerol. It is known as Luya in Tagalog. It has an aerial part of about 0.8 m high, which could grow up to 1.5 m tall (in Costa Rica, Hawaii, and Honduras), and a finger-like perennial underground part or rhizomes called hands.

Ginger can be consumed fresh, dehydrated, powdered, or pickled. ‘Salabat,’ or ginger tea, a popular hot drink, is made from boiled fresh ginger or powdered ginger. Ginger adds flavor to some typical Filipino dishes like tinola, goto, arroz cal do, paksiw, batchoy, and pinakbet.

Ginger stimulates gastric juice secretion and relieves cough and flu. It also treats migraine, travel sickness, and rheumatoid arthritis. It is known to improve blood circulation and reduce fat deposits in the arteries. The curative properties of ginger come from the volatile oil that contains cingibereno, cingiberol, borneol, felandreno, citral, cineol, starch, mucilage, and resin, among other substances. 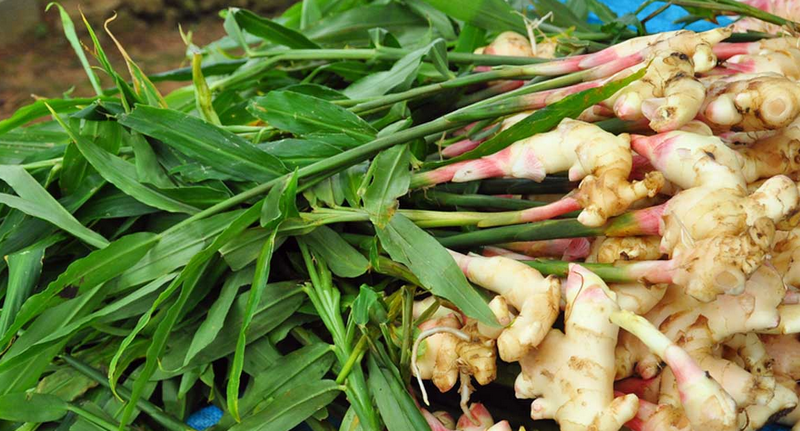 Ginger Farming in the Philippines: Soil and Climate Requirements

Ginger can be grown in flat to slightly rolling areas with well-drained, light to medium textured soil high in organic matter and pH of 6.8-7.0. It can grow in elevations of up to 1,500 meters (m) above sea level with about 200-300 cm annual rainfall evenly distributed throughout the year and a temperature range of 25 -35°C. It grows well even with
25-40% shading.

About 800 to 1,500 kg seedpieces are required per hectare. Store ginger roots under shade and cover with banana or coconut leaves. Select healthy rhizomes with sprouts or eyes just before planting. Cut into pieces with 3-4 sprouts each.

The seedpieces may also be pre-germinated for uniform growth. Prepare raised beds of any desired length measuring 1 m wide and 20 cm high. Line sow the seedpieces 2 cm apart and cover with a mixture of compost and coir dust. Water as needed. Transplant when the sprouts are about 1-2 cm long. New varieties can also be propagated by micropropagation or tissue culture to increase the rate of multiplication.

Clear the area of bushes or stubbles of the previous crops to facilitate land preparation. These can be used in compost piles and should not be burned.

Ginger Farming in the Philippines: Planting

In the Philippines, the most common farmed ginger variety is our native ginger called imugan.

Planting is done at the start of the rainy season, usually from April to May. In areas with an abundant supply of water throughout the year, planting can be done anytime. Distribute pre-germinated seed pieces in furrows 30 cm apart and cover lightly with soil. In small-scale plantings, mulch with rice straw or coconut leaves. Ginger is usually intercropped with perennial crops such as coconut and coffee. Multiple cropping of ginger (0.3 m x 3 m), papaya (3 m x 3 m), pineapple (0.3 m x 0.75 m), and tomato (1.0 m x 3.0 m) is a common practice in Cavite.
fertilization

Ginger takes up large amounts of nutrients. The general fertilizer requirement is 180 kg/ha N, 180 kg/ha P,05, and 255 kg/ha K. The considerably high K requirement makes ginger sensitive to a low K supply. A hectare of ginger requires 11.5 bags 14-14-14 and 4 bags 0-0-60 in addition to 5 t/ha chicken or animal manure. Incorporate manure during furrow preparation and apply inorganic fertilizers as sidedress at 30 and 60 days after planting.

Ginger requires light but frequent irrigation during the vegetative stage if rainfall is not evenly distributed. Depending on soil type and seasonal rainfall, irrigation varies from 4 to 7 days.

Ginger Farming in the Philippines: Pest and Disease Management

Cutworms, scale insects, and aphids are common ginger pests, but they do not cause significant yield losses. Leaf spot, rhizome rot, and bacterial wilt are some of the major diseases. Ginger is tolerant to leafspot. Rhizome rot can be prevented by strict sanitation and the use of Trichoderma as part of organic fertilization. During storage, separate healthy rhizomes from shriveled and discolored ones. Bacterial wilt infection can be avoided by planting in bacterial wilt-free areas. Pull out infected plants and burn.

Harvest ginger when the leaves turn yellow and wither. This is about 8-10 months after planting, depending on the variety used. To harvest, dig each hill with a spading fork or a hoe, pull the entire plant, shake off the soil, lay on top of the bed, and cut off the stem without breaking the rhizomes. Care should be practiced during harvesting to minimize injury that results in faster weight loss and susceptibility to decay.

Frequently Asked Questions on Ginger Farming in the Philippines

Is ginger farming in the Philippines profitable?

As mentioned above, ginger is one of the most profitable crops to grow, lower risk, and easy to manage. A 1 hectare of ginger can give you a net income of at least P1.5M in just 8 to 10 months.

Where does ginger grow in the Philippines?

How long does it take to grow ginger in the Philippines?

Ginger can be harvested from 8 to 10 months. If the price is low, you can wait for another month when the price goes up.

How much is a kilo of ginger in the Philippines?

The price of ginger is very volatile. As of August 14, 2022, it is currently around P160 and goes up and down every week. Sometimes it goes up to P210 and sometimes also goes down as low as P70 (very seldom).

How do you grow ginger fast?

If you are buying ginger from a store, soak the rhizomes in water overnight because they are sometimes treated with a growth retardant. Plant the rhizomes 6 to 8 inches apart, 2 to 4 inches deep, and with the growth buds pointing upward. They can be planted whole or in smaller pieces with a couple of growing buds each. Ginger can grow fast with the right amount of organic and synthetic fertilizers.

When should ginger be planted?

The best time for planting ginger in the Philippines is before the rainy season which is the last week of April or May. Under irrigated conditions, it can be planted well in advance during early March.

Can you grow ginger all year round?

Ginger is a tropical plant that will grow year-round if you’re in a warm climate. In cooler climates, ginger should be planted in a planter that can be brought inside during the cold months. Wait until after the first frost has passed to plant your ginger.

What kind of soil does ginger need?

Is ginger easy to grow?

Ginger is a tropical plant that is easy to grow indoors. All you need is a piece of fresh ginger, some water, and some soil to get a plant growing.

How do you harvest ginger without killing plants?

How do I know my ginger is ready to harvest?

Once the plant has blossomed, the rhizomes are mature enough for harvesting, usually about 8-12 months from sprouting. At this juncture, the leaves have yellowed and dried and the stems are falling over. The rhizomes will have firmer skin that will bruise less easily when handling and washing. This is the time the ginger can be harvested.

Can ginger leaves be used?

Ginger leaves have also been used for food-flavoring and Asian Traditional Medicine, especially in China.

You may also download a pdf version of this manual from the Department of Agriculture here: