Growing bananas in hydroponics, is it really possible?

All over the world, banana production is facing a major crisis. The industry, which relies heavily on a single vegetatively propagated crop (Cavendish), is under attack by deadly pathogenic fungi.

This is not a new phenomenon with banana cultivation. In the 1950s, the monoculture of one of the first widely grown commercial crops, Gros Michel, was wiped out by banana pathogens, leading to the development of the Cavendish variety, then resistant to Fusarium.

However, as we all know, pathogens have an incredible ability to evolve and mutate, new strains of Fusarium have been developed and are threatening the banana industry once again.

Ninety-five percent of the bananas consumed in North America come from the Cavendish crop and are therefore susceptible to new strains of Fusarium, and since bananas are the fourth most consumed food crop and an important staple for millions of people in the tropics, we need to find ways to overcome these disease threats is of global importance. 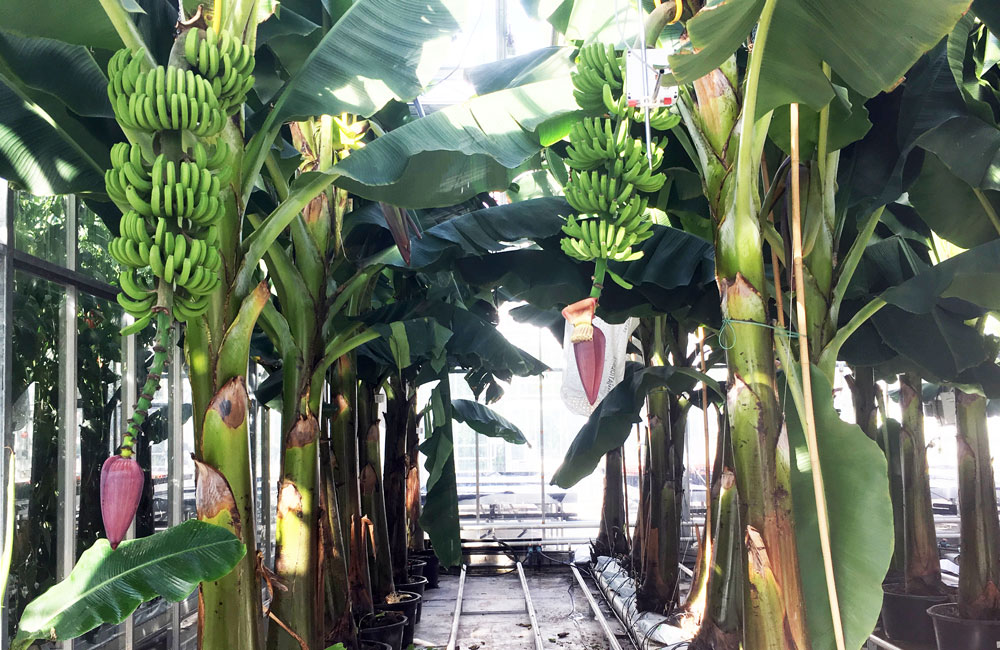 While the improvement of crop plants with resistance to both pathogens may be promising, the continued development of new disease strains is an ongoing possibility.

Bananas have been grown in greenhouses for decades, however, production has been limited to subtropical areas with large greenhouse crops established in the Canary Islands and Morocco.

These are largely grown on the ground, using greenhouses to modify the environment with a higher daytime temperature, and protection against sunburn, wind, and hail, providing higher yields. More recently, hydroponic greenhouse bananas have been successfully grown in the Netherlands using coir and rock wool substrates to avoid the risk of aggressive pathogenic fungi.

Advantages of Growing Bananas in Hydroponics

Hydroponic banana production, especially in greenhouses, can have some important advantages: the main objective is the prevention of plant losses and the intensive use of agrochemicals to control fungal pathogens. Yields increase in a protected climate and with the ideal application of water and nutrients.

Although production costs are higher than those of traditional open-air plantations, consumers may be willing to pay for unsprayed, locally produced fruit that has not been shipped long distances to markets. There are also several other banana productions that may attract local markets and result in less dependence on the Cavendish variety.

One of the main concerns of hydroponic banana production is the size of the mature plants. Cavendish is a tall variety and can grow over 5-6 meters tall with a 2.5-meter span, however, a greenhouse banana industry would be better focused on growing smaller dwarf fruit varieties such as Dwarf Cavendish, Grande Naine, Lady Finger, Orito, Williams, Poyo, Dwarf Red or Dwarf Apple: many of them are between 2 and 3 meters tall. Grande Naine and Dwarf Cavendish are the most commonly grown greenhouse crops and perform well in hydroponics and soil-based systems.

Large vats/pots of at least 60 centimeters deep or deep beds of a suitable growing medium are recommended, both to provide sufficient volume for the large and extensive root system that develops, and to provide stability to the plant, as heavy plant loads can tip over when transported with a big load of fruit. Although dwarf plants are a bit more compact than taller ones, some type of staking or plant support may be needed. Suitable substrates include coir, rock wool, perlite, and combinations thereof.

The banana-growing environment requires warm and humid conditions. Plants are sensitive to frost and although cooler nights may not be too damaging, daytime temperatures should not drop below 16 ° C. Optimal temperatures are between 25-32 ° C, however, they are tolerated in warmer conditions, provided sufficient water is provided.

Bananas are widely propagated from sprouts, however, tissue-grown seedlings are another method that prevents disease transmission from one crop to another. Bananas are not trees but are tall, herbaceous, and short-lived perennial monocots. The leaves are wide and overlapping, forming a kind of thick trunk.

The rhizomes are formed around the base of the plant, from which the shoots develop, these are cut and used for the production of the next crop.

Commercial banana varieties develop fruits without the need for pollination, the clusters or clusters of fruits contain “hands” of fruits made up of several individual “fingers”. Many cultivars produce at least 60 fruits in a single bloom.

Fruit production takes approximately 16 to 18 months from planting to harvest, after which the main stem of the plant dies and is removed and replanted with new shoots. Bananas are unresponsive during the day and a crop that is planted in succession for many months can produce fruit throughout the year, provided sufficient heat is provided.

Bananas do not require a lot of maintenance during the production phase: removing the extra shoots that form around the base of the plant helps to direct the nutrients and assimilate them in the flowering/development of the fruit. Some flower/cluster pruning can be done depending on the cultivar; this includes removing the large secondary bloom at the base of the bunch, as well as removing some berries to encourage larger fruit size on the remaining hands.

Banana plants are heavy consumers with a particularly high need for potassium during the fruit development stages. The absorption of macronutrients is carried out in the following order: Potassium (K)> Nitrogen (N)> Calcium (Ca)> Magnesium (Mg)> Phosphorus (P). For trace elements, the order of absorption is Manganese (Mn)> Iron (Fe)> Boron (B)> Zinc (Zn)> Copper (Cu). Bananas under ideal growing conditions can be produced with an EC nutrient in the range of 1.6 to 1.8 and a pH of 5.5 to 5.8.

The recommended nutrient levels in banana leaves can be used to diagnose any deficiency symptoms and act as a guide for hydroponic nutrient formulations for this crop.

Although leaf levels are useful in determining nutrient requirements, in high-fruiting crops such as bananas, a significant amount of absorbed potassium is incorporated into the fruit tissue and this should be taken into account during the development stage of Fruit.

The recommended leaf nutrient levels for bananas are:

Bananas, particularly dwarf varieties, are a promising cash crop for greenhouse and hydroponic production, however, the more compact types also make excellent houseplants and specimens for indoor gardens. The ease of propagation, attractive tropical-looking foliage, and the possibility of fresh bananas are just an added bonus.